Then I'll gladly wait for that instead and support Duranik with my purchase.

The ReviveDC Project blog; reviews for our releases and news
Top

CD AGES wrote:Then I'll gladly wait for that instead and support Duranik with my purchase.

Same here. At least they were always honest about their product.

How do you know? More info please.

CD AGES wrote:Then I'll gladly wait for that instead and support Duranik with my purchase.

"Don't worry, DC fans, we have not forgotten you".

I think they confirmed a new game's in the work to DC-news or something. 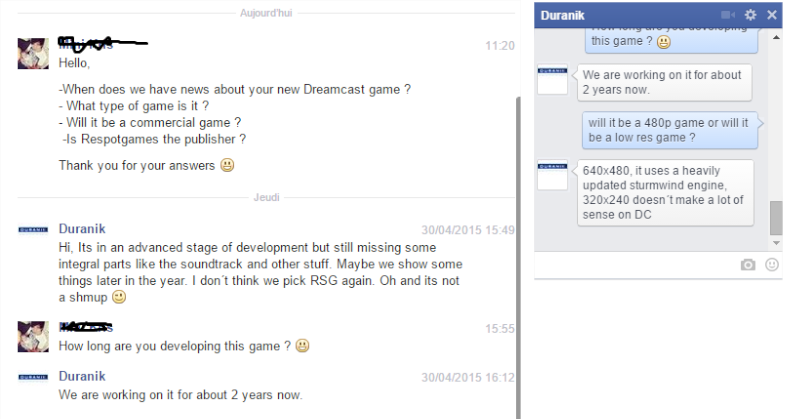 COOL! Thanks for the heads up!
Top

I spoke with Rolang (Duranik) a few days ago and i told him about publishing, how is possible is to corporate with WM, at least they are more trusted from RSG..
http://misokatsu64.webs.com/
Top

I don't even care that this topic was derailed by the more or less announced Duranik game. I'd much rather have the Duranik game too!

Also, I agree it may be a smart move not using RSG. Not just because of the debacle around the launch of Sturmwind, but because they seem to have left the DC dev community, and maybe even game dev community altogether.
Top

Im all for new games. But dux is now the madden of DC
Top

I've always found dux and its graphic style to be somewhat boring. I'm disappointed that we are going to have a new revised dux instead of something with a new aesthetic or different gameplay elements. A new dux does not excite me but the duranik game sounds intriguing - its not a shmup, but uses a modified version of the sturmwind engine...
Top

I'm a sucker for new releases, so my pre-order for Redux 2 was an easy decision.
Feedback
Top
Post Reply
30 posts