I think that is the current maximum for an unofficial release. It will be interesting to see if important releases to come like Midsummer, Pier Solar, Elysian Shadows, Age of the Beast, Hypertension and Ameba and Xenocider can raise the bar.
http://www.youtube.com/watch?v=HbD4EOG6mSM&feature=youtube_gdata_player
Top

^^^^^^^^Yes indeed. Hopefully they all enjoy healthy sales too. Is age of the beast still a thing?
It was announced SO long ago... but I want it big-time! All of those games interest me except for pier solar, which I might buy anyways to support the scene.
Top

Yes, it is. They are still working on it.
http://www.youtube.com/watch?v=HbD4EOG6mSM&feature=youtube_gdata_player
Top

Omnibot2000 wrote:Yes, it is. They are still working on it.

Cool. On a side note Hucast is back online ;that was quick!
Top

Its true! (Side note) Of course Elansar & Philia is on sale now that I just bought it @ Play-Asia. Seems they raised the price for DUX 1.5 + Alice Moms Rescue combo though so it works out I guess lol
Top

Wrath of Khan wrote:Nobody seems to know for sure how many copies a typical dc game sells. Iv'e heard 3 to 4,000 copies bandied about before and thought that this might be the average?

According to Rene from Hucast IIRC, the average is about 2000 DC users/fan active enough to buy new releases, so about 2000 copies can be considered quite a success. If Sturmwind sold 5000, well, kudos to them, I think it was well deserved. I'm a big fan of Duranik and am looking forward to their next release.

Personally, this is one of our main concerns regarding regarding Xenocider but specially Ameba as our goal is to release it for Saturn as well, and we honestly have no idea what the real demand for that would be in the end. It's something we need to calculate carefully as both the coding and the manufacturing will be far more complicated (and expensive).

On the other hand, Pier Solar and Elysian Shadows are big success stories, but they had managed to build a huge community/following before launching their Kickstarter campaigns, so there were many collectors or simply curious users who wished to own a copy, even if they don't plan to ever opening it. Obviously what buyers want to do with their copies is not the creator's business, just reaching the funding needed to finish the game, so these "completist collectors" can be a big help.
@hombreimagina | Writer @retrosumus
Top

Looking at the Hucast site, is the Regular Edition of Ghost Blade in the DVD case sold out and replaced with the jewl case edition? Seems they still have the LE though.
Top

Nico0020 wrote:Looking at the Hucast site, is the Regular Edition of Ghost Blade in the DVD case sold out and replaced with the jewl case edition? Seems they still have the LE though.

Looks that way. It's been over a month since release and I have yet to receive my copy. Fingers crossed it's coming.
Top

I had preorder in 2013 and i have received the CD case, not the DVD case. 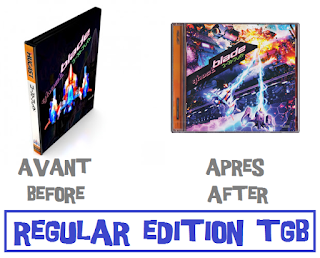