The twin stick controller isn't the same. It's two joysticks akin to flight simulator joysticks of the early to mid 90s, each with only two buttons (top and front).

Having a more modern-style dual stick controller is going to be more beneficial across multiple games - and it can be used like a regular controller when the secondary stick isn't in use.
Top

Unfortunately yes it was a one off. I was trying to get a friend of mine to make one for me but we lost contact. I really would like to see my idea of doing a mod like that with digital microswitches added above the triggers to the sides of where the VMU goes as I think it would be a tight fit but would work out great. Like mentioned before the controller already supports C and Z so they would be good for that. They just are digital versions of L and R anyway.

Please excuse my crude PhotoShop skills it is just for demonstrational purposes. 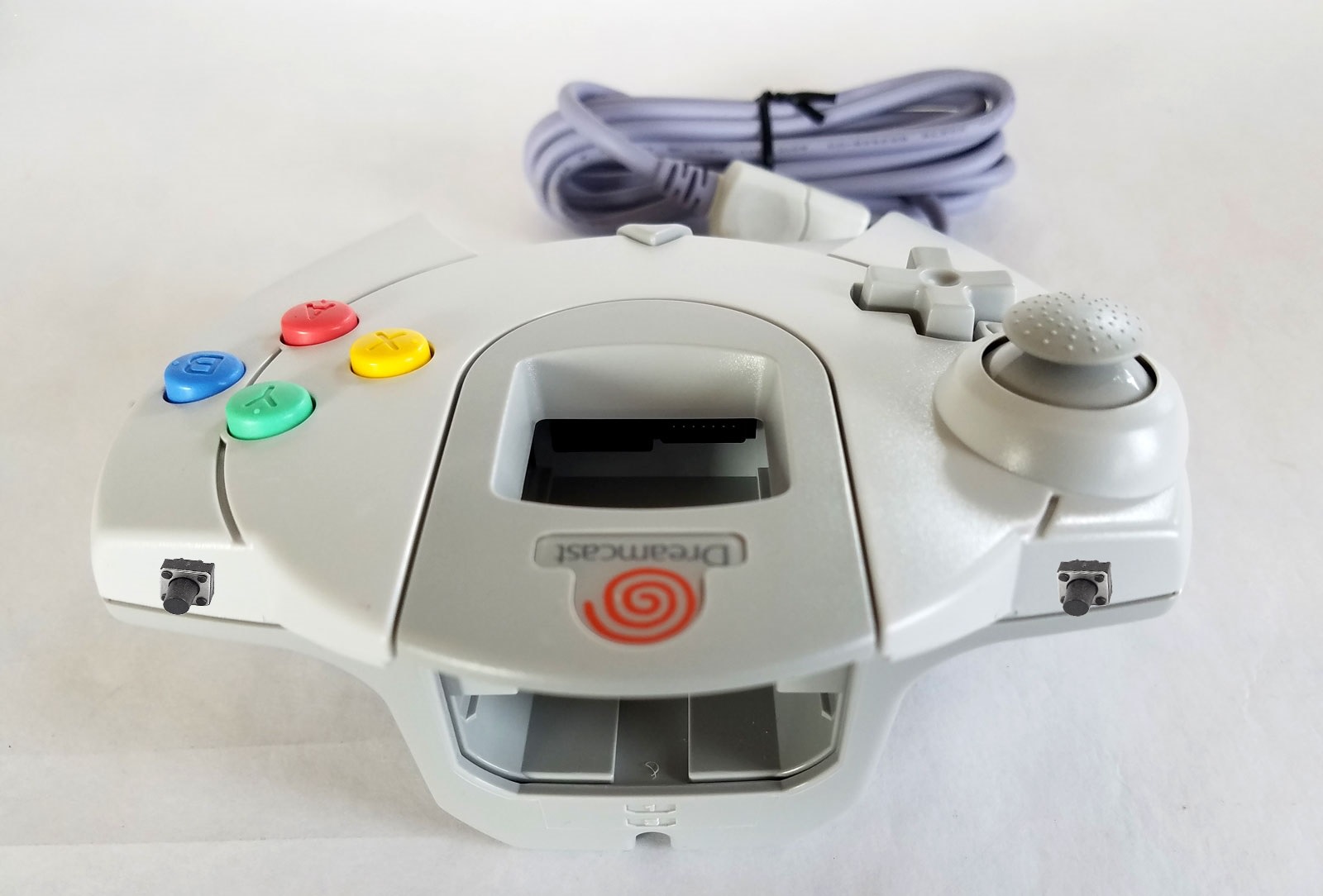 However there was a surprisingly decent 3rd party Naki controller with 6 face buttons that used the actual Sega molds with some edits. Too bad the slow and turbo buttons weren't higher up directly below A and X. That would allow them to be modded for C and Z and still leave room for a faux joystick mod as well.

Hell I don't see why we can't as a community design an all new controller with the enhancements we want and make it a reality? I am sure that somebody could be commissioned in the community to sell modded controllers with 2 more extra face buttons and the 2nd analog stick. Who knows maybe it could be a true analog stick as well instead of just tapping into the face or D-pad buttons?

Well the easiest starting point I can think of is the original Xbox S controller.

There is a slot at the top for a VMU slot to be accommodated (with modification of course), the appropriate amount of buttons (Tho White and Black could be moved to shoulder bumpers) and it comes with built in rumble features (Which could be wired to be recognised by the DC) and the right thumbstick (Which could be wired as a D-Pad duplicate as mentioned earlier.

It's the closest fit between Dreamcast controller and modern controller. However this is just to accommodate a modded design rather than a purpose built controller. The most difficult thing to accommodate will likely be including the VMU - as it requires a stable slot to sit in.
Top

I just hope these controllers that Retro-Bit comes out with that the dongles can be flashed with special firmware to work with the PS3/4 and Xbone controllers. Then obviously we would loose the ability to save but meh, 2nd controller port VMU saving works for most games, although not all.

Has there been any news on those controllers since originally announced? I definitely want a saturn/dreamcast wireless pad. heres hoping for some decent build quality.
Top

Tarnish wrote:I'm a bit puzzled by that USB Dreamcast controller. I mean, what games would that be good for exactly?

With the Genesis and Saturn controllers, one could say (and I agree with) that they're great for old school games due to their very good d-pad and 6 button layout.

But the DC controller doesn't have either of that, and with not enough buttons and only 1 analog stick it falls short of being an alternative to modern controllers as well, so..I find it weird.

Tho I guess it would be neat for use with DC emulators and indie devs for development.

First of all, the modern controllers you like, are there because of this controller, or did you just think the original xbox US controller just fell down from the SKIES all by itself with no influence from ANY other controller? And the S controller after it? Or what about ANY controller for the Xbox anyway? While speaking of controllers I have yet to see a following of fans for controllers with 3 "handles" like the N64 controller. This controller not only laid the fundamentals of todays modern controllers but it is also the only one officially made that are 100% guaranteed to work with any games for this system, and I dont see how playing games for older consoles except those optimized for a 6 button layout, would be any different. Its a legendary controller. I could seriously fall asleep with this in my hands because of how comfortable it is and it has VMU slots. Not something you find so many other places, is it?

While we are talking controllers and you mention Saturn controllers, I might add that the MK1 version of the Saturn controller is maybe the worst controller available on any Sega system altogether. Not enough buttons? I would REALLY like to know what you are actually playing on a PC that this controller is not capable of doing, be it RPG, platform or just about anything.

Which game it would be good for? Are you serious? I would seriously like to know what YOU are playing that the Dreamcast controller is fundamentally unable to handle if you are not playing a typical FPS game, where *ANY* controller sucks in the first place, and really is just a matter of getting used to, the button layout where you strafe with buttons instead of the left analog stick.

And yeah, if you are trying to develop something that requires user interaction but is doable with an emulator and you might not nescessarily HAVE TO use dcload-ip for example or the Katana Dev-kit, its nice to have the opportunity to actually test with the official controller for the system.

What I was trying to get at: why would anyone want to buy/use a Dreamcast controller in this day and age for anything other than to play Dreamcast games?

Like you said, the Xbox controller took the DC controller and improved on it over the years, making the DC controller inferior by todays standards. It might have been fine when it was originally released in 1998/1999 (which I don't agree with, even back then it had problems that showed over time) but today it's inferior in the number of analog sticks, the quality of the analog stick (I just played using the factory DC thumbstick cap after years of using one with a PS4 cap..never want to use the original DC cap ever again) and the number of buttons.

The VMU slots were cool because the DC games were made with using them in mind. But what PC games use the VMU today? None, because noone ever thought there would be a USB DC controller one day. Game saves today are (I would assume) too big to even fit on a VMU, let alone the fact that memory cards are no longer the standard, and the games are not programmed to display anything on a VMU screen. Maybe the Jump packs are compatible with the rumble from games, that remains to be seen.

What games am I playing on the PC for which the DC controller would be not suitable? I don't play many games in general, but for example Carmageddon: Max Damage uses both analog sticks and all buttons (with the exception of one of the stick buttons if I recall). The left stick controls turning left/right (and the stick button sounds the horn), the right stick moves the camera in 360° to look around. The triggers are used for acceleration and brake, the shoulder buttons change back and forth between power-ups, the 4 face buttons are for handbrake, using the selected power-up, repairing and resetting the car. The Dpad is used for setting up quick shortcuts for your favorite power-ups. With a DC controller, I could not use the camera, sound the horn (this is not a real problem) or select between power-ups.

Another example would be Enter the Gungeon, a top down 2D run and gun game, where the left stick is used to move the character around, and the right stick is used for aiming 360°. Again, with a DC controller, you would need to compromise to play the game.

Dude, the Bluetooth DC controller is for use with a Dreamcast. It comes with a BT receiver you plug in to the console, similar to the Nintendo Gamecube's Wavebird controller. While I'm sure it syncs nicely to a PC, I don't think that's the core function of it.

Anthony817 wrote:Who knows maybe it could be a true analog stick as well instead of just tapping into the face or D-pad buttons?

I know. It could be. The Dreamcast itself does support a second analog stick, but because no such controller was ever made, there are probably precisely 0 games that would work with it. It would be very easy to add dual stick support in future games, though.

A makeshift second analog stick could probably be mapped to the L and R triggers. Perhaps a (very small) number of existing games could then be configured to work with it.

For a more robust approach, you'd need some sort of programmable and configurable hardware that interfaces with the Dreamcast's controller ports on one end, and accepts digital and analog inputs on the other (either from an existing modern gamepad or a custom-built one). I'm pretty sure Arduino could do that, although I don't have any experience with it.
Top

Roareye wrote:Dude, the Bluetooth DC controller is for use with a Dreamcast. It comes with a BT receiver you plug in to the console, similar to the Nintendo Gamecube's Wavebird controller. While I'm sure it syncs nicely to a PC, I don't think that's the core function of it.

I was specifically talking about the wired USB controller.
Top
Post Reply
73 posts