I'd like to eventually (if at possible) clean-up and re-do the built-in half-width Latin font for this game. At the very least, I wanted to add the accented è character for when Iris calls Ogami "Mon Frère". I was originally having issues even locating and then modifying the font tiles, but I managed to figure it out last night. 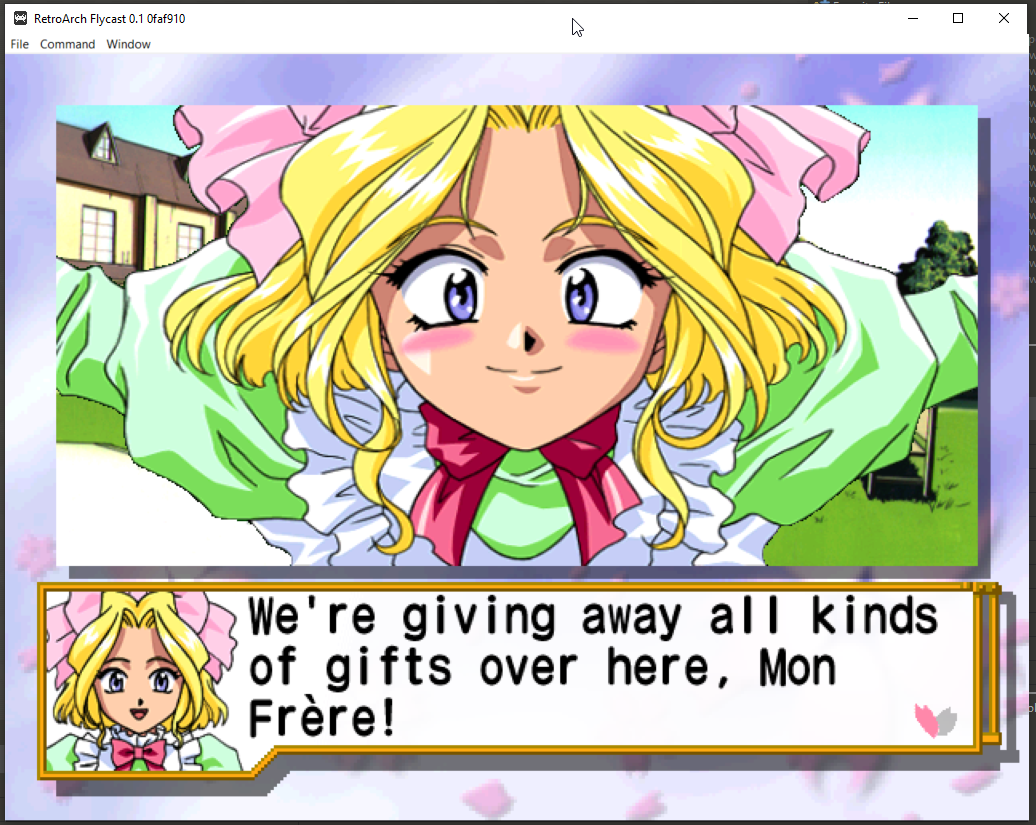 These font tiles are 16w x 32h, and as a result finding a good drop-in replacement font that looks more consistent/clean is a bit challenging. The way I see it, I have two options:

1) Just use a smaller font that is still 16 wide, but not 32 high. Issue here being that small characters won't likely fill enough space width-wise, like the lowercase l (lowercase "L") or "i".

2) Convert everything to a variable-width font (VWF), which would require finding the place where the game is told the width of each character it's going to render. The challenge here is pretty obvious, in that this is a pretty complicated modification to make to most games. However, an additional challenge is presented here... I can confirm that this game actually takes the font table and then converts it to a PVR texture on-the-fly in order to reference the 4-corner coordinates of each character as needed when rendering text. To be honest, the routine(s) that handle all of that are likely above my paygrade to modify, haha.

EDIT: I forgot to mention option 3, which is to just improve the font tiles I can and then leave it alone

very interesting. what seemed like a smaller game to translate has turned into a beast. everything you've done so far is good work.
Top

dubcity wrote:very interesting. what seemed like a smaller game to translate has turned into a beast. everything you've done so far is good work.

Haha, you're telling me! This is unlike any other puzzle game I've ever seen -- and I love it! There is so much content here for fans to enjoy.
Find me on...

I just want to say thank you for working on this. I just wish all these Japanese DC exclusives were translated to English one day. I know it's not gonna happen but one can dream

Hi, I am really looking forward to being able to play this game once it's finished. Thanks for your awesome work and the shared knowledge. Makes me want to try the same with a JP exclusive...
Top

It's been a while since I updated this thread, but for those of you following me elsewhere, you know that we are very close to release (like a month or so). I just wanted to post here to let everyone know that there are no technical hurdles left to overcome. All proprietary file formats and compression methods have been reverse-engineered or otherwise figured out.

When the translation patch is publicly released, my GitHub repository will have all of the custom tooling developed for this game. Unfortunately, I don't believe the work done for "Sakura Wars: Columns 2" will be very helpful for other Dreamcast games in the franchise, as this game in particular was developed by Tenky and as a such uses it's own unique file formats. However, I have only arrived at that conclusion after a quick cursory glance of "Sakura Wars 2" for Dreamcast, so I may be wrong.

For those curious, here are some recent updates from around the social media world.

Another quick update... I decided to develop a little custom patching utility for this game (pictured below). I may end up re-working it to serve as a general purpose GDI patcher that all of us doing translations/hacks can use, similar to what Knight0fDragon did with his Sega Saturn Patcher.

As of right now, my custom patcher leverages buildgdi and gditools in the background. I don't expect this to change though, as both of these utilities are good at what they do and there's no sense in re-inventing the wheel. Instead, bundling them together with my patcher seems the far wiser move.

The last thing I'll mention is how this patcher works. It's quite simple, actually. The program only requires the user to select their unpatched GDI file. From there, my application will read the TOC and then copy all of the files (GDI+RAW+BIN) to a temporary location. Then, that GDI is extracted. Next, my program will take all of the patched files and overwrite their corresponding originals in that extracted GDI folder. Lastly, the new GDI is built and all temporary files/folders are removed. 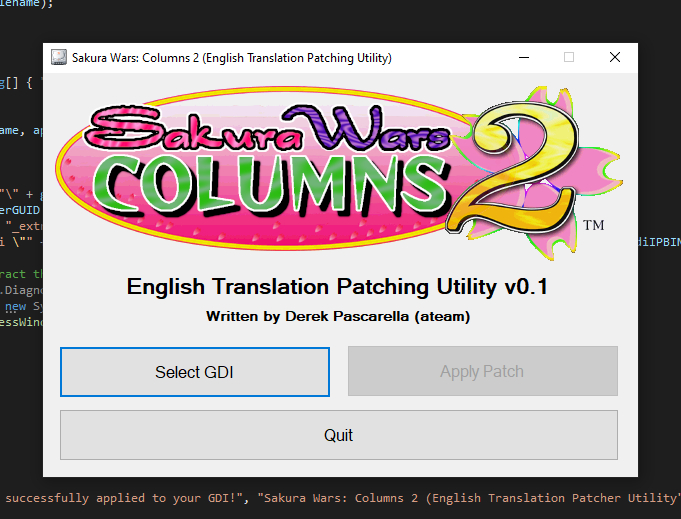 This is really cool!
Top

It's official! The release date for the English translation patch is Monday, May 3rd! Keep your eyes peeled.
Find me on...