Online games, how to get online, and anything involving Dreamcast online can be discussed here.
Post Reply
26 posts

My usb modem is from tact as well but they both look clean and are stable.
Top

This is probably not accurate but based on pelvicthrustman's post I quickly cobbled this together "it is a WIP".

Don't use it until someone with better knowledge than me has confirmed it is good.

It doesn't mention the cutting of certain traces on the USB 56k modem etc.

With regards to trace cutting I believe the connection to to PIN 3 on the RJ11 socket (USB 56k Modem) will have to be severed on the PCB and the positive and negative from output of booster board will have to be brought into either side of the cut to complete the circuit again.
Top

Here are some really bad shots of the mod

Sadly it won't fit in the original case unless I remove the led light shafts from inside.

Here's my take on the built-in LVI. Wasn't able to put the boost converter inside the DELL modem, due to the plastic that conducts the LED lights to the top of the case. Anyway, since I own a PAL, a NTSC-US and a NTSC-JAP modems, having the boost converter outside is useful to regulate the potentiometer that controls the output voltage, and doesn't look too bad either.

Cut the trace on the Modem PCB between the capacitor legs. 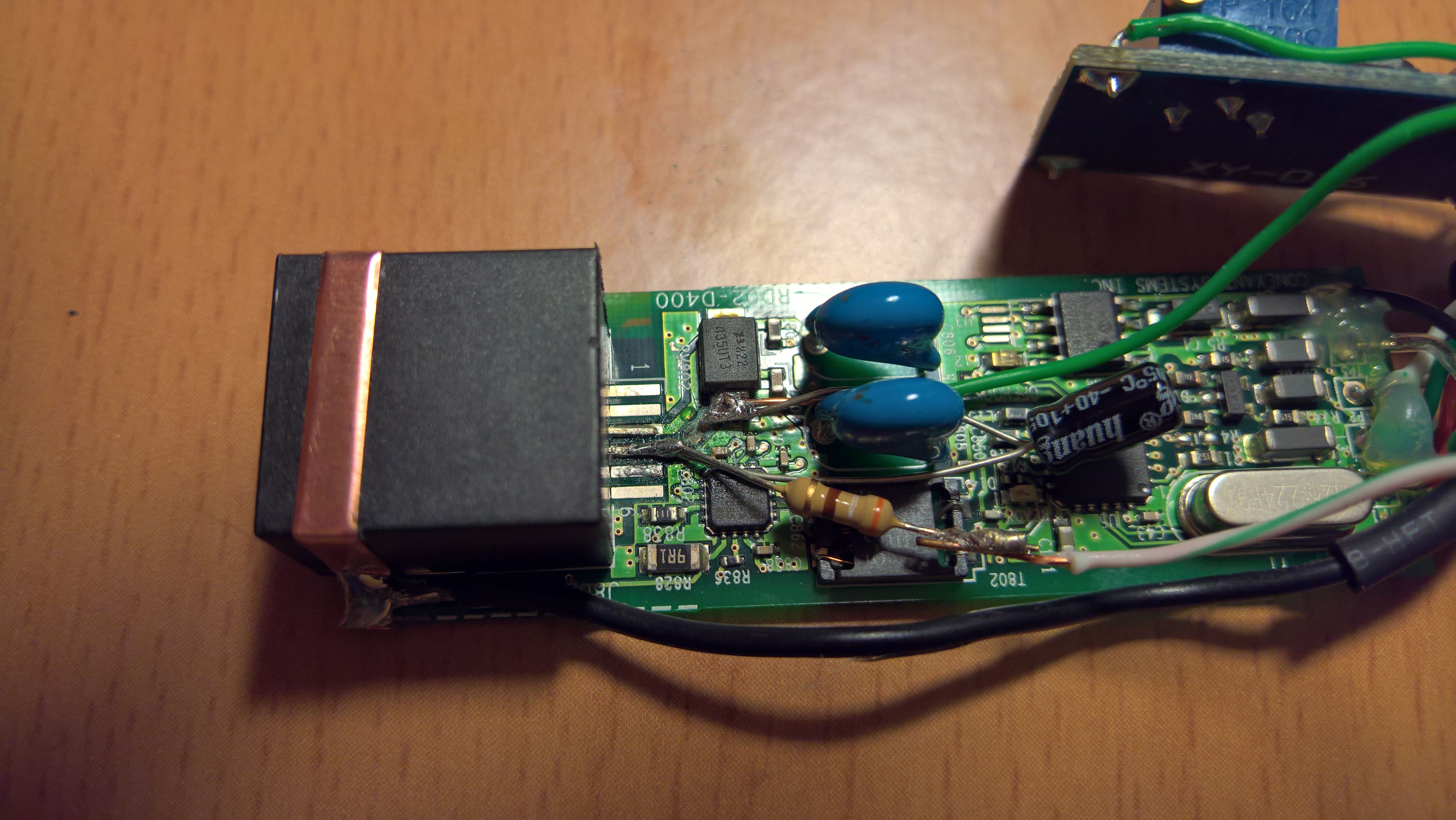 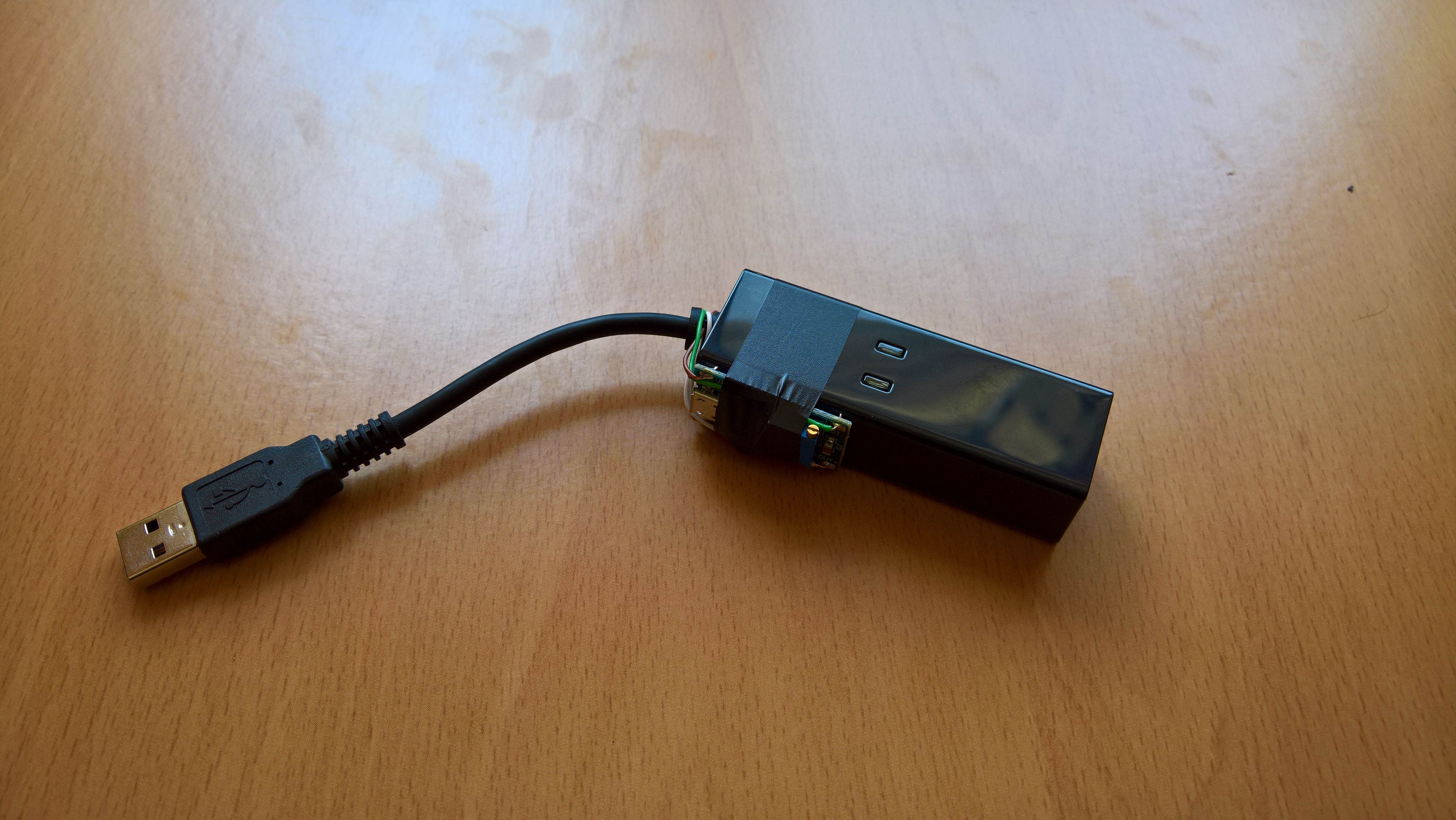 Nice job Raen. that's pretty much what i did just on the other trace guess it doesn't matter which one lol sorry i never got a guide together i hadn't made some for a while, thought i posted some pics but idk where they went.
knew if people were good enough to do the mod they could figure it out. Too bad that board didn't fit inside,the usb cable just seemed simpler
I did just make another batch of modems some people still wanted my old ones =]
Last edited by TacT on Thu Mar 15, 2018 3:28 pm, edited 1 time in total.

That's a nice solution, I believe 18v will work on all modems so adjusting the pot inside wouldn't be required. I haven't tried it myself but I believe this to be the case.

What kind of booster board did you get? looks smaller than mine.
Top

I did it over a year ago, not the tidiest work I've done, but gets the job done. I lack better tools and expertise on how to solder directly on the surface of the PCB (even if it these are through-hole components, and not SMDs), that's why the internal soldering looks a little dirty, while the soldering on the boost converter looks cleaner - through-hole soldering is way easier than surface soldering too, but if you lack the proper tools, it's even harder. I only had a 30 W soldering iron laying around, 60 W would be way better and proper, getting the solder to melt and adhere to both ends is a lot easier with a 60 W iron.

Used a heated paperclip to melt the plastic/rubber, to make way for the wires (which can be taken from an ethernet cable). Also, didn't use a diode.


@Whiteysnakey: Bought it off of eBay, the listing is long gone, but looks like this one: https://www.ebay.com/itm/5pcs-DC-DC-2A- ... Sw5cNYa0DD

No problem, wasn't too keen on having two USB ports used on the RPi just for the LVI...

EDIT: Oops! Better not use my pics as a reference! As I said before, I made this mod over a year ago, but didn't quite test it at the time due to lack of time, and then I just forgot about it. Took the change to give it a try now and can't get a connection with it ("no dial tone" error) in any game. The old-fashioned LVI I also have laying around worked fine with the stock modem, before I modded it.

Will have to check for faults, or if the culprit is the cut on the wrong trace (will have to re-shunt trace 4 and apply the LVI to trace 3 by cutting it).
Top

Found this PCB schematic for a USB LVI for the Dreamcast. Never saw this posted, so I'll just leave it here:

A board for building a line voltage inducer (as part of a phone cable) powered by USB. Meant for use with a Dreamcast and DreamPi. The board includes a DC-DC boost converter which boosts the 5v supplied via the USB to the required voltage- both 9v and 18v are supported, you just have to populate the board for the appropriate voltage. Phone jacks are used instead of splicing the cable to make the inducer as easy to use as possible.

Might be useful for someone who wants something tidier and to make a case for it.
Top
Post Reply
26 posts