Forum rules
Please check the other forums in the Dreamcast section before posting here to see if your topic would fit better in those categories. Example: A new game/homebrew release would go in the New Releases/Homebrew/Emulation section: http://dreamcast-talk.com/forum/viewforum.php?f=5 or if you're having an issue with getting your Dreamcast to work or a game to boot it would go in the Support section: http://dreamcast-talk.com/forum/viewforum.php?f=42
Post Reply
21 posts

I just finished putting together my ideal dreamcast and made an account to share it with you guys and get some feedback!

A video of pcwzrd13's internal IDE solution inspired me to attempt the mod as well as try to take it a step further by retaining the gdrom drive. Without that video I never would have known that I can solder to the gdrom drive board instead of to the motherboard for the cleanest installation possible. 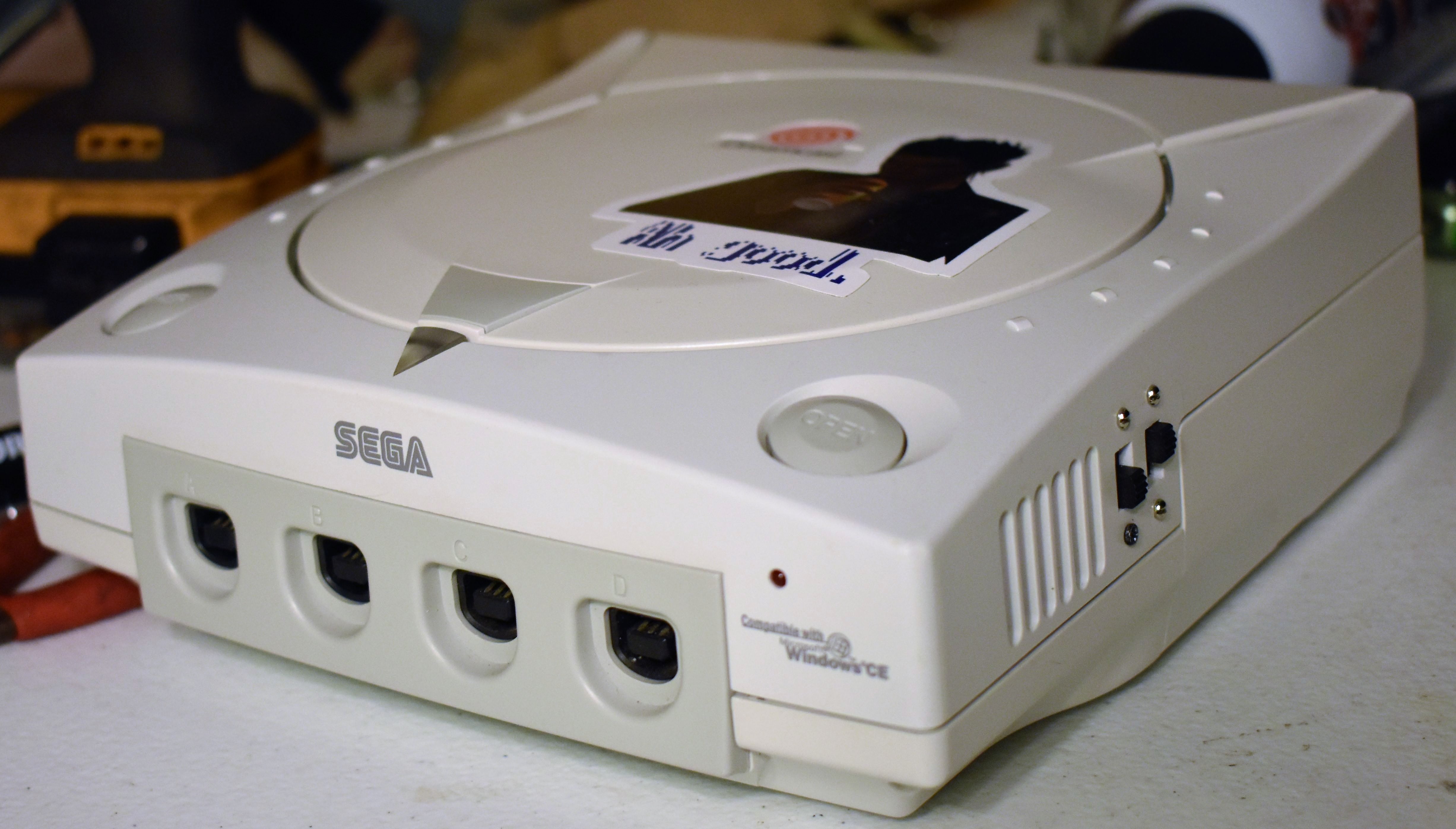 One switch is for bios and turning on/off the hard drive and the other is for VGA. The VGA switch will become an overclock switch in the future :^)


I started by just taking the top of the shell off and finding the best spot for the hdd. This lead me to discover the huge amount of space over the controller ports. 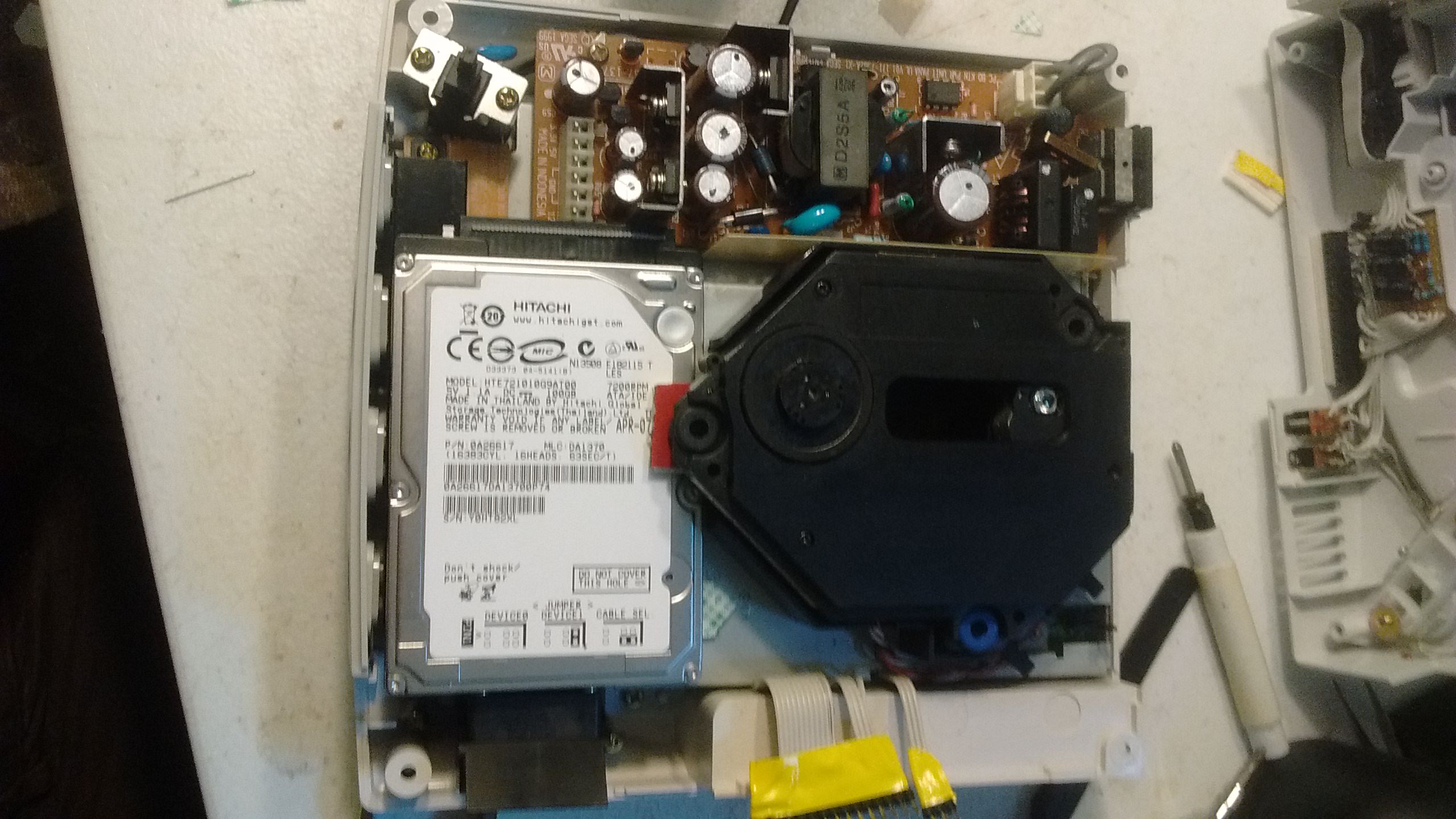 There were a few major things that physically blocked the hard drive from being installed. The power led light tunnel, the lid opener thing, and the gdrom dive itself needed pretty major work to make room. The ribbon cable to the controller ports just had to be smooshed down and the clock battery had to be mounted sideways.

I cut off the top protrusions and put the spring on the side with some small screws. It feels completely stock when opening the lid. 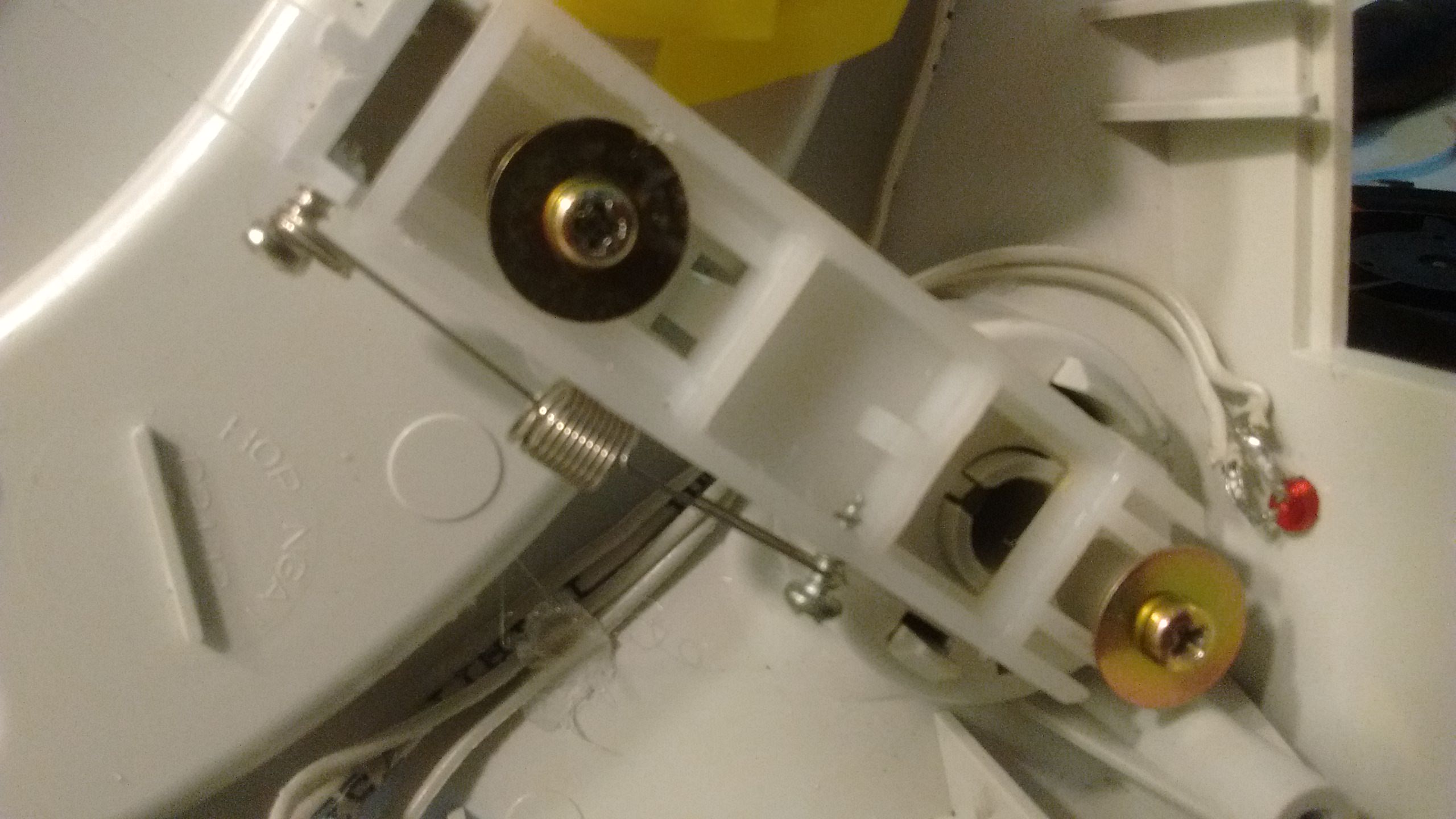 Here is how the gdrom drive had to be cut, as well as the solution to not having the third support. The support that goes into the top of the bushing keeps it from moving around at all. 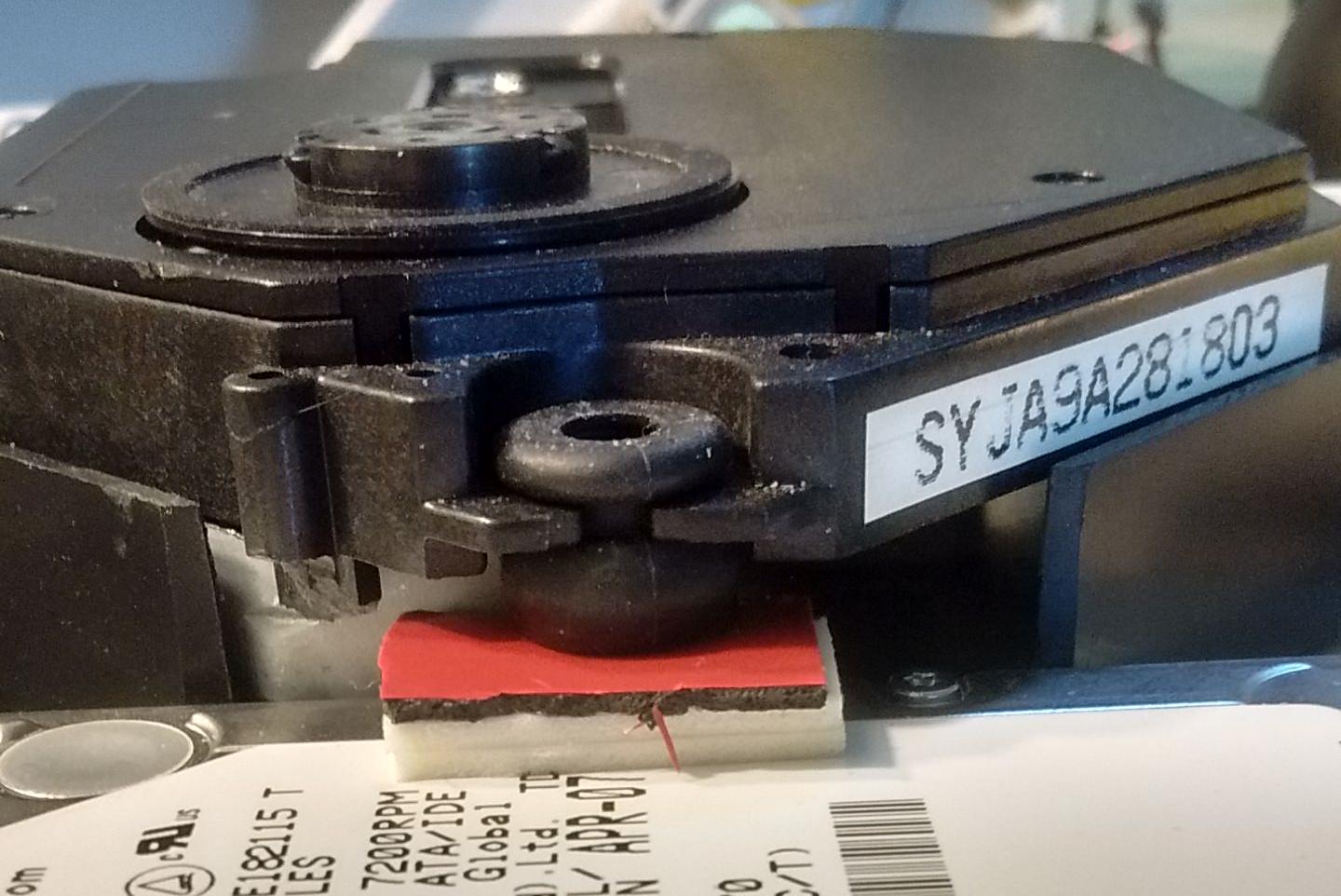 And this is what was done to solve the light tunnel problem. I used my most cloudy light tube as to not waste a good one. Putting the led right in the thing made it a bit brighter which is cool. I just followed the trace for power to the motherboard right after the ribbon connector so that every mod done could be on one plug. 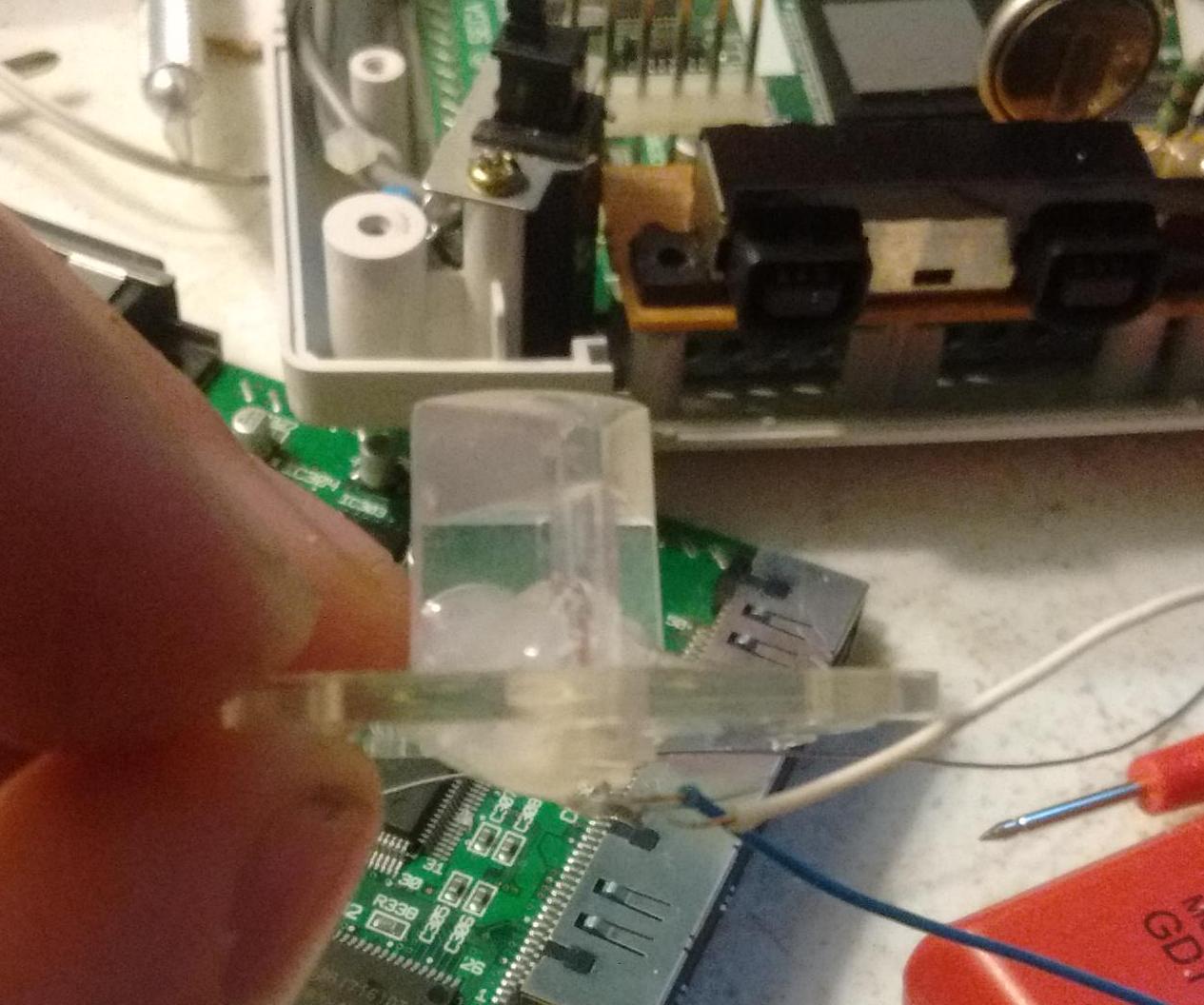 I ended up getting extremely lucky with the hdd cable, the way its folded makes it pretty much impossible to see. A bit of super glue was used to keep the fold really tight as well as glue the dirt from my fingers onto it lol. I ended up putting the hdd 5v power line to a switch. You can also see the few holes I had to make. 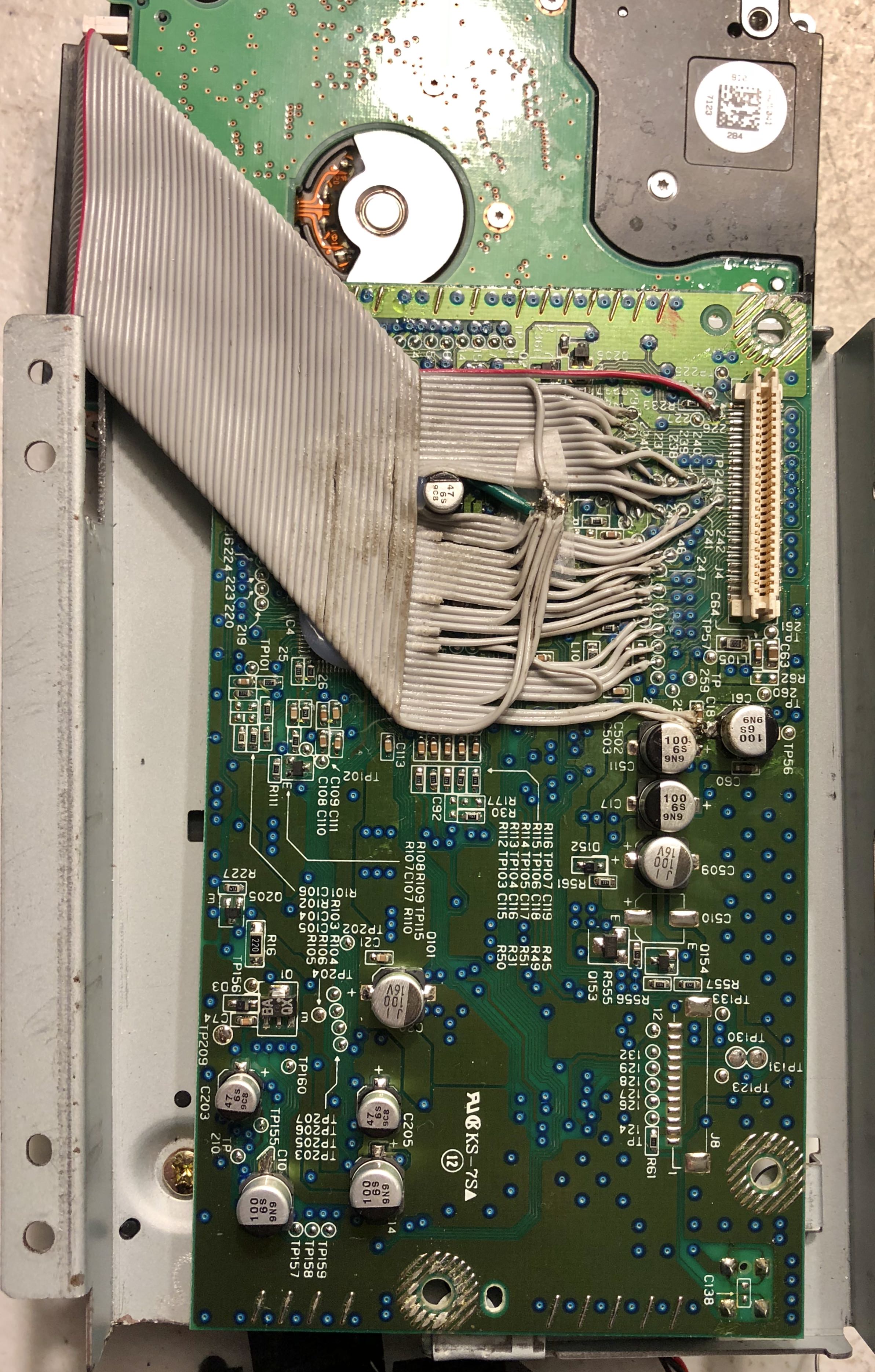 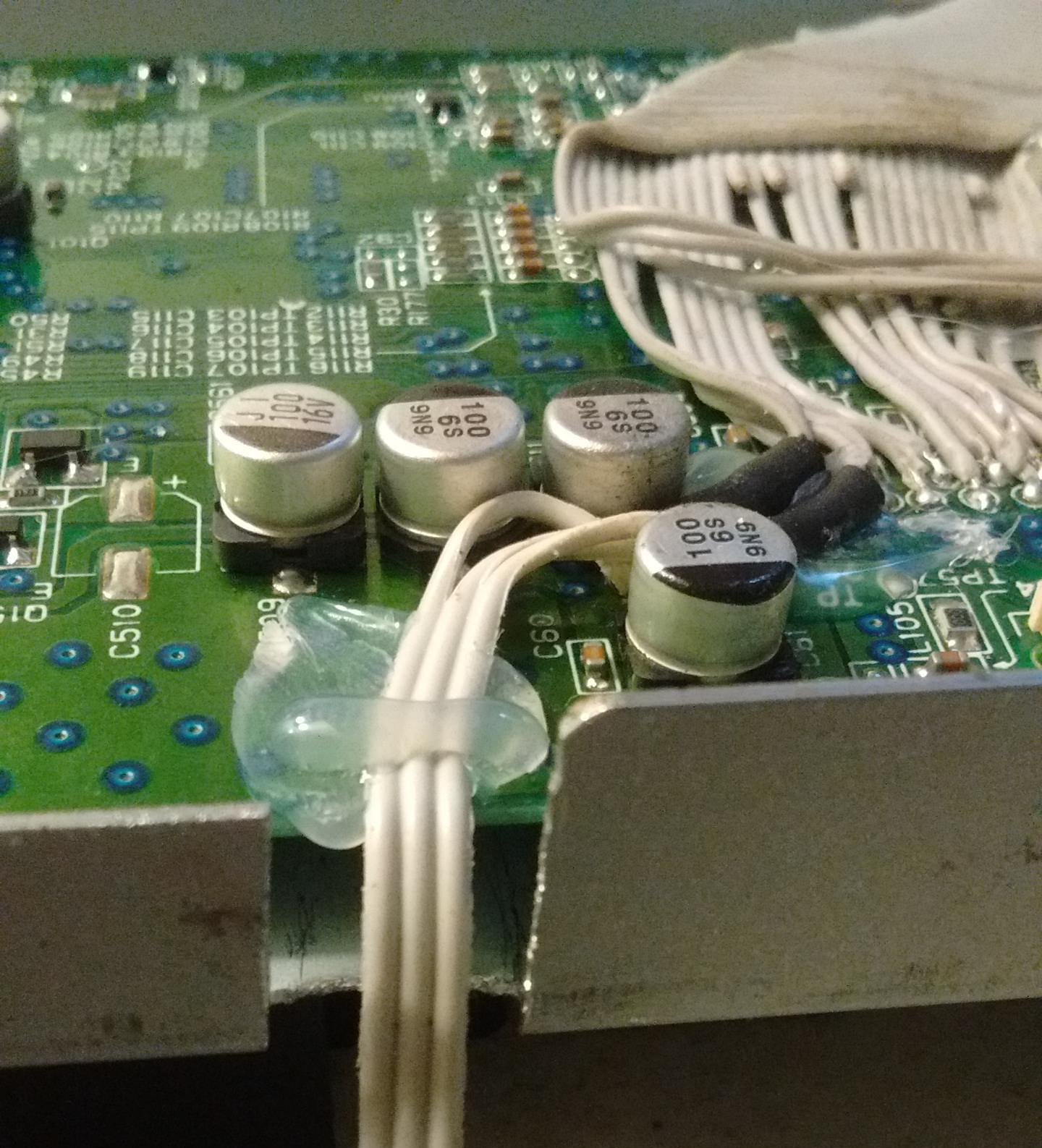 If I have a hard drive I need a dual bios for dreamshell of course... 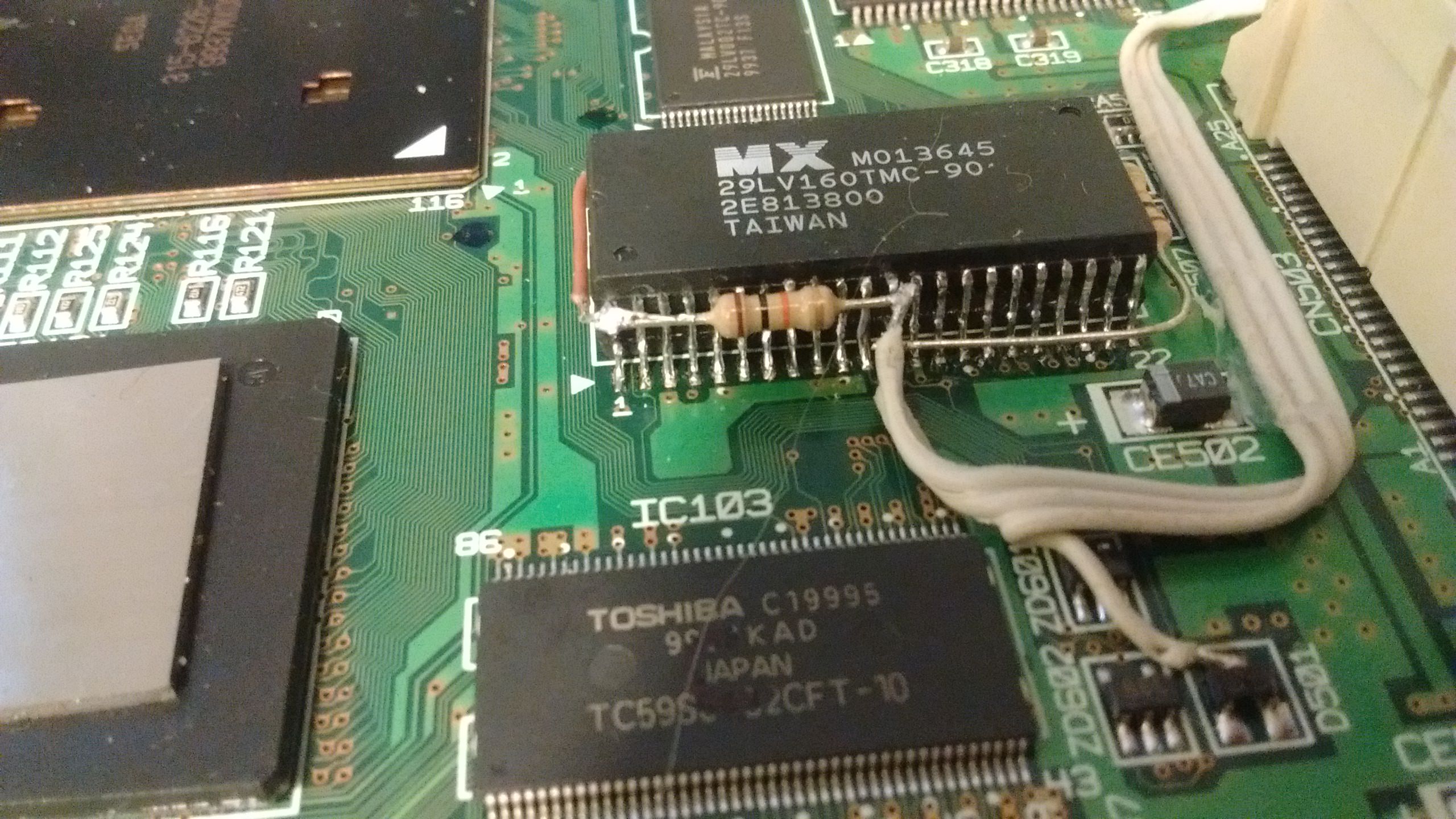 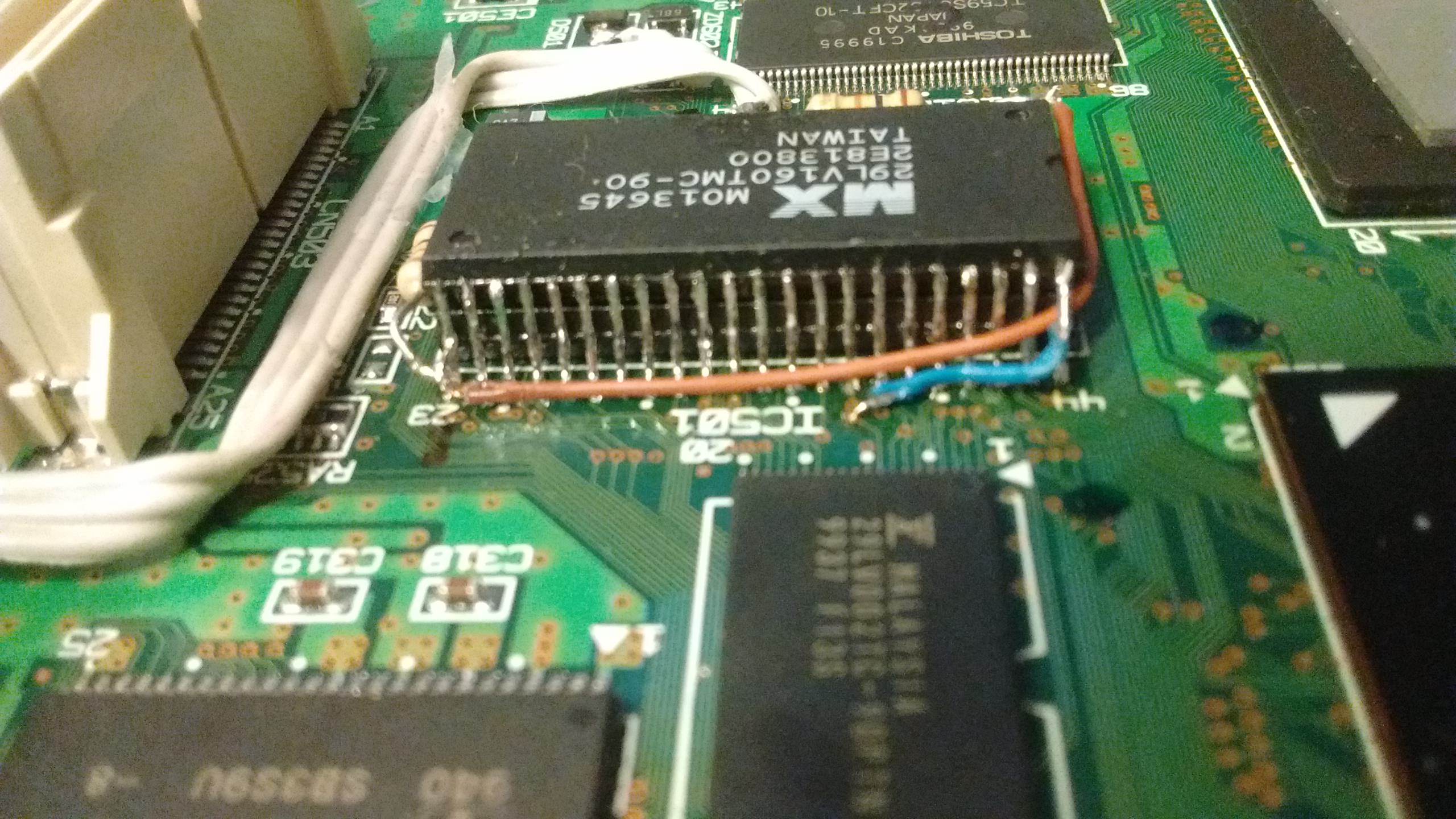 Whats the point of all of this without the clearest picture possible? Of course it has built in vga! I know there are $15 cables yadda yadda it outputs vga natively etc. I just like the way a vga port looks as well as just being able to plug any VGA cable in that I want. Also It was free because it came from the hoard :^)

In order for it to be grouped with the rest of the ports to make it look factory as possible, I used a really thin vga port and tacked the wires against the back with some super glue. 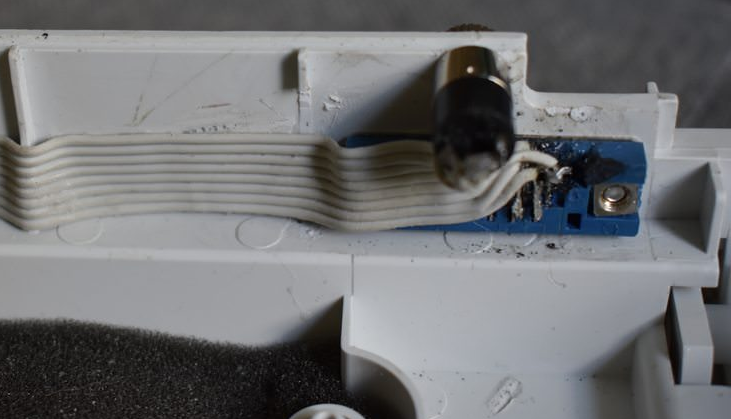 I used really crapdosis harbor freight files so it took way longer than it should have to make this hole. Also those are security screws from an old hard drive, they fit perfectly. 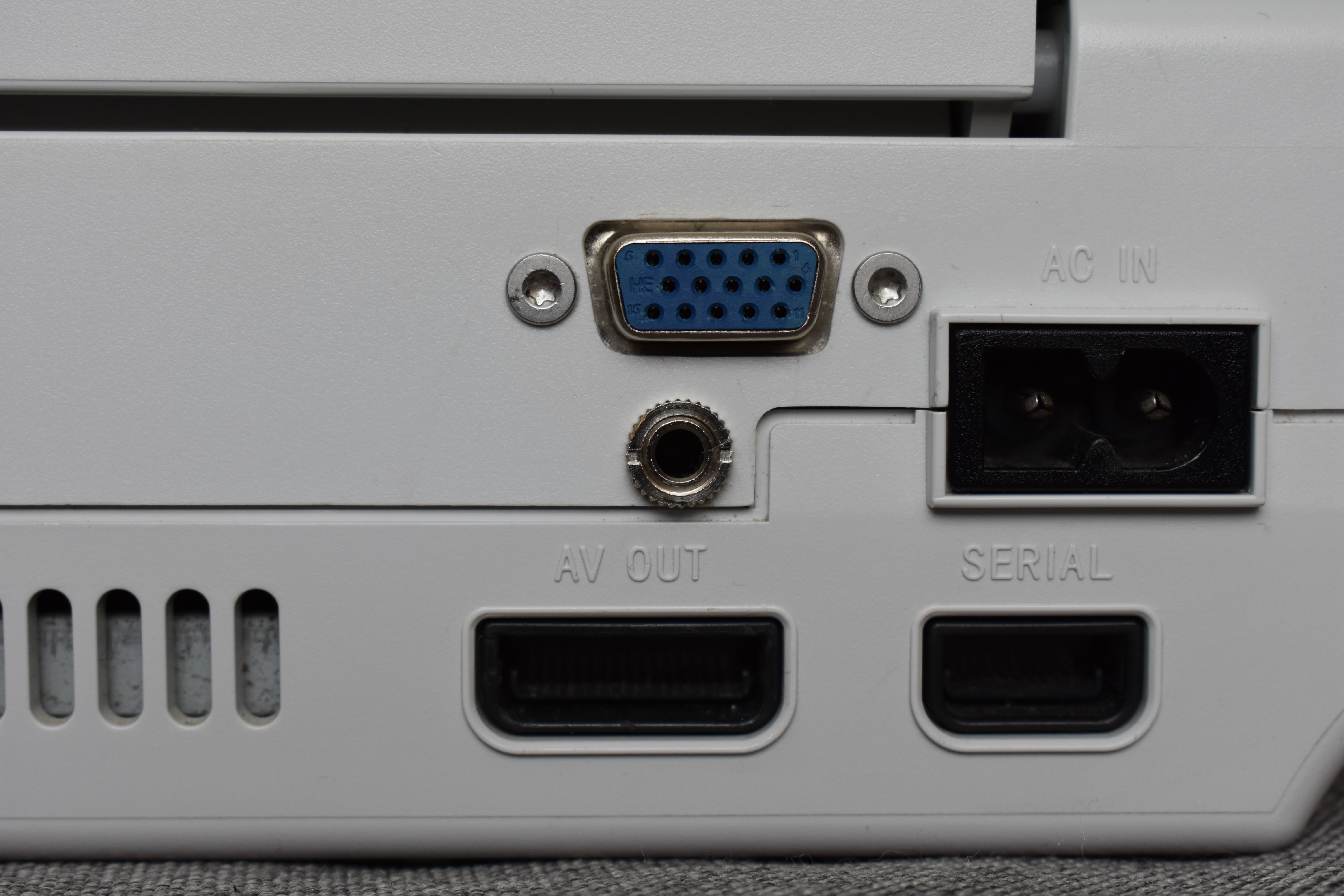 I used the circuit from mmmonkey, It fits really well here. 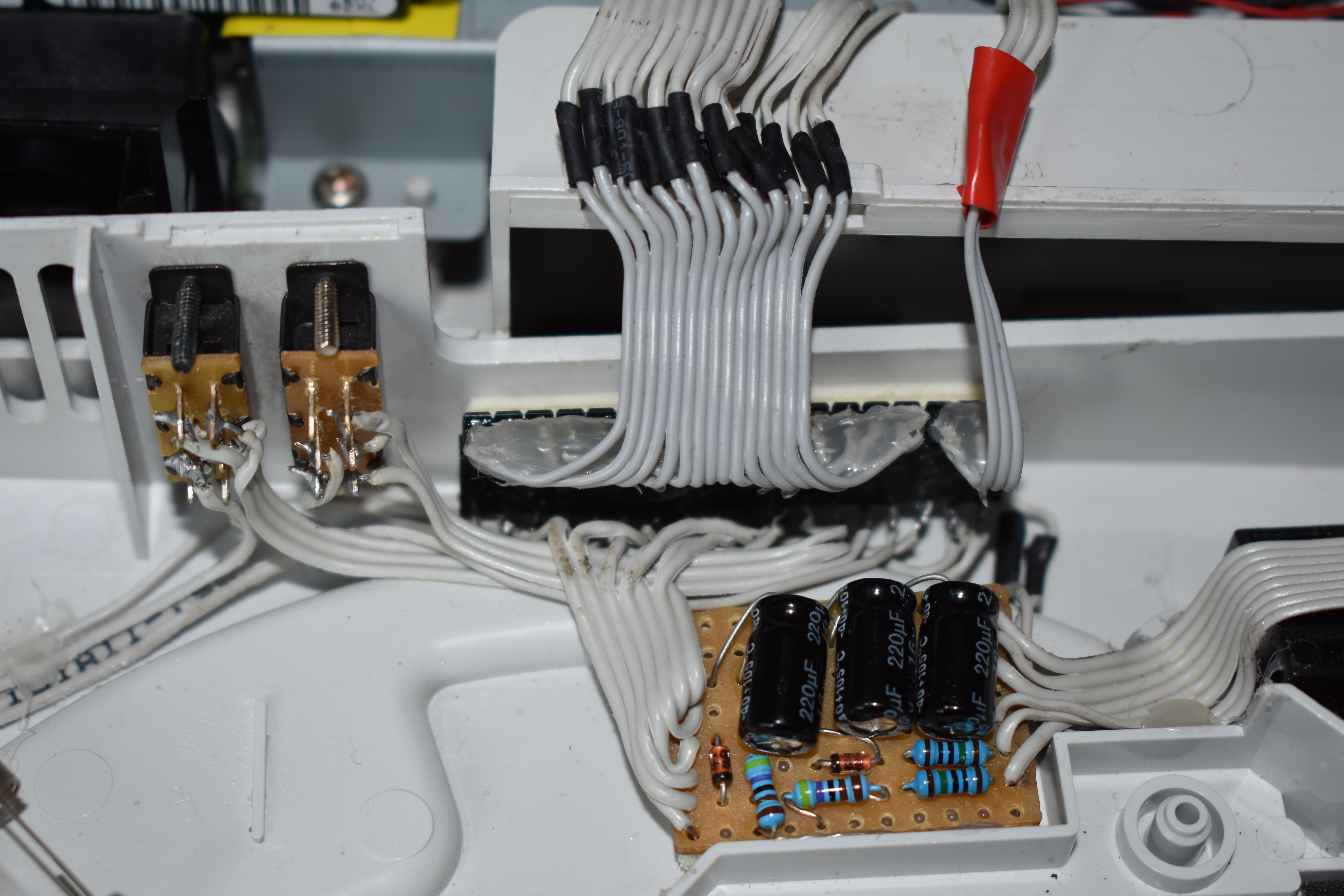 This is how I routed the wires on the bottom of the board. Of course with some more IDE cables to make it as difficult as possible to know what wire goes where. 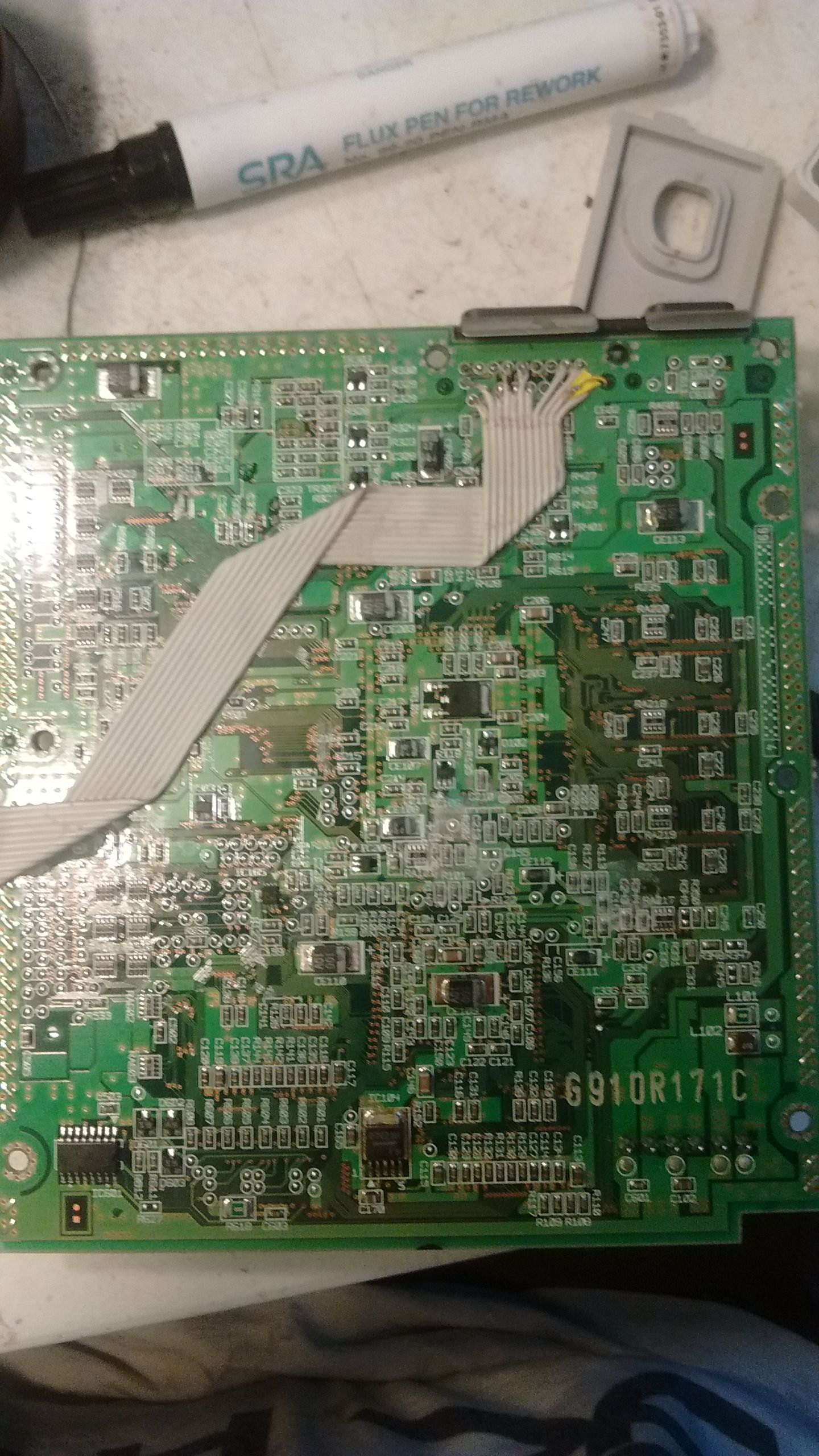 This is the second board I wired for VGA, the first one had no audio in one channel and I was sure I goofed somewhere. I was messing with it for hours before deciding just to try another board. I ended up using a board that I lifted a pad on in 10th grade trying to add VGA. I just got the connection from the top of the board to fix it. 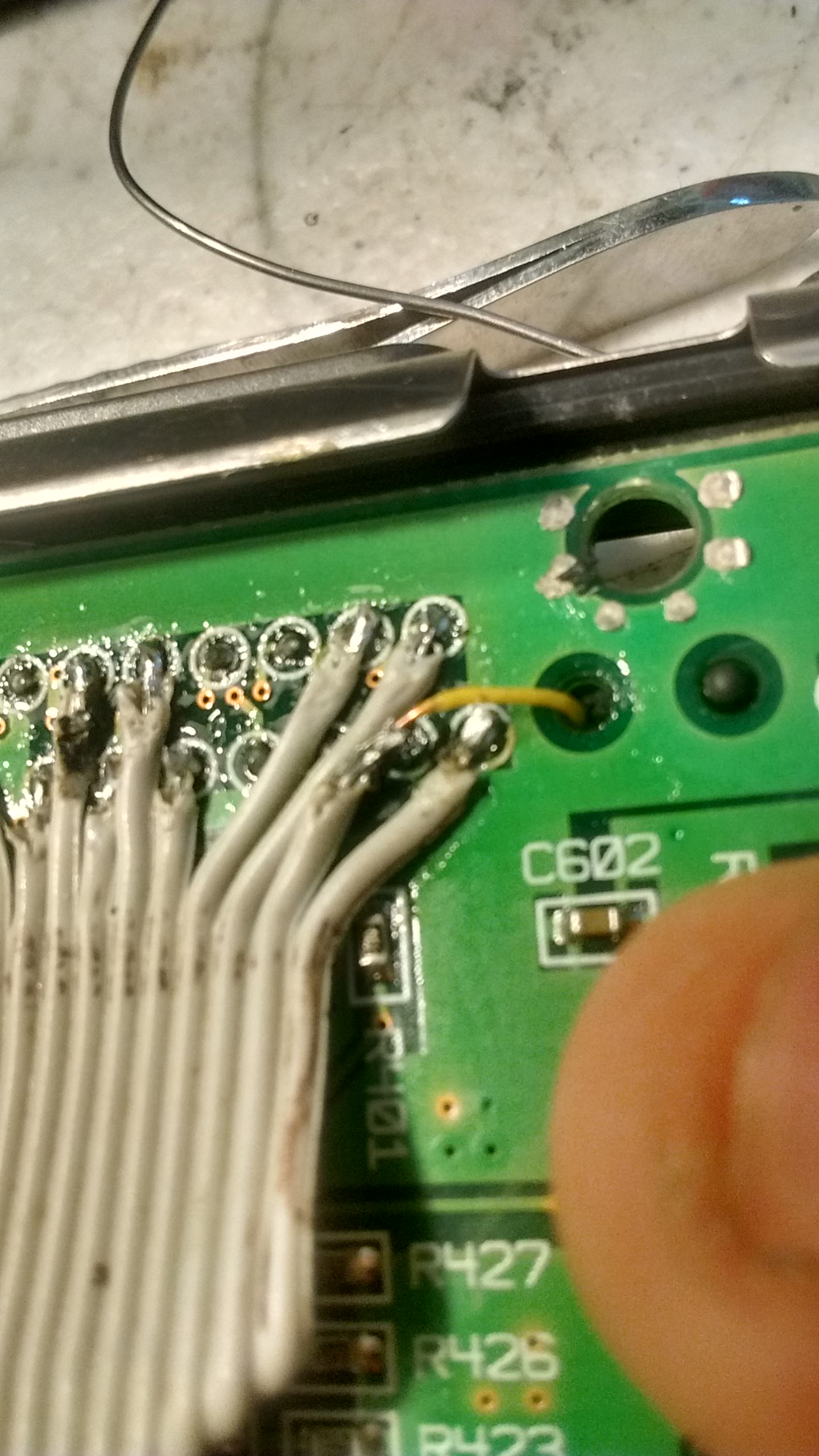 It was really important to me that this could be taken apart pretty much as easily as a stock dreamcast, so I used one plug that everything plugs into. 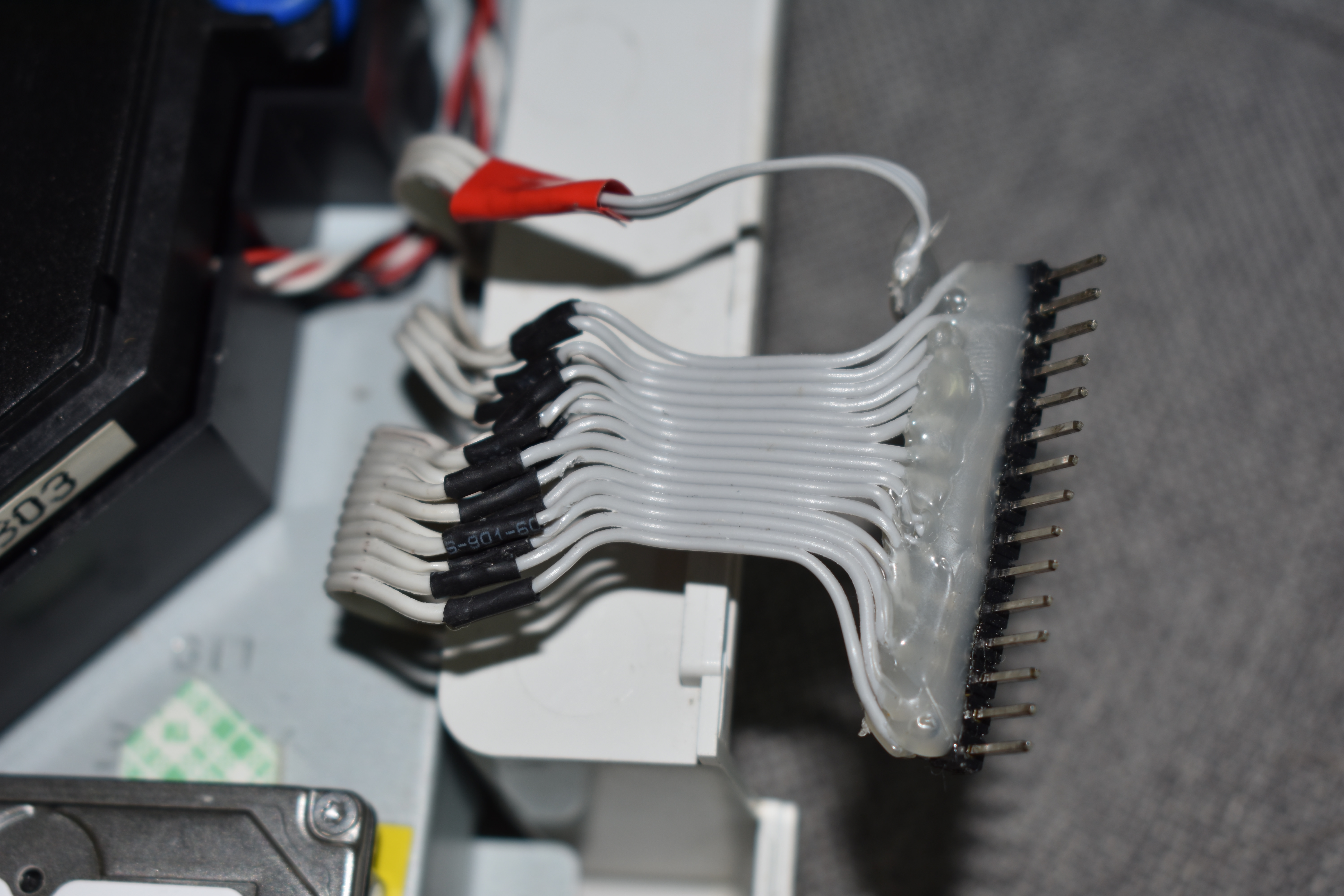 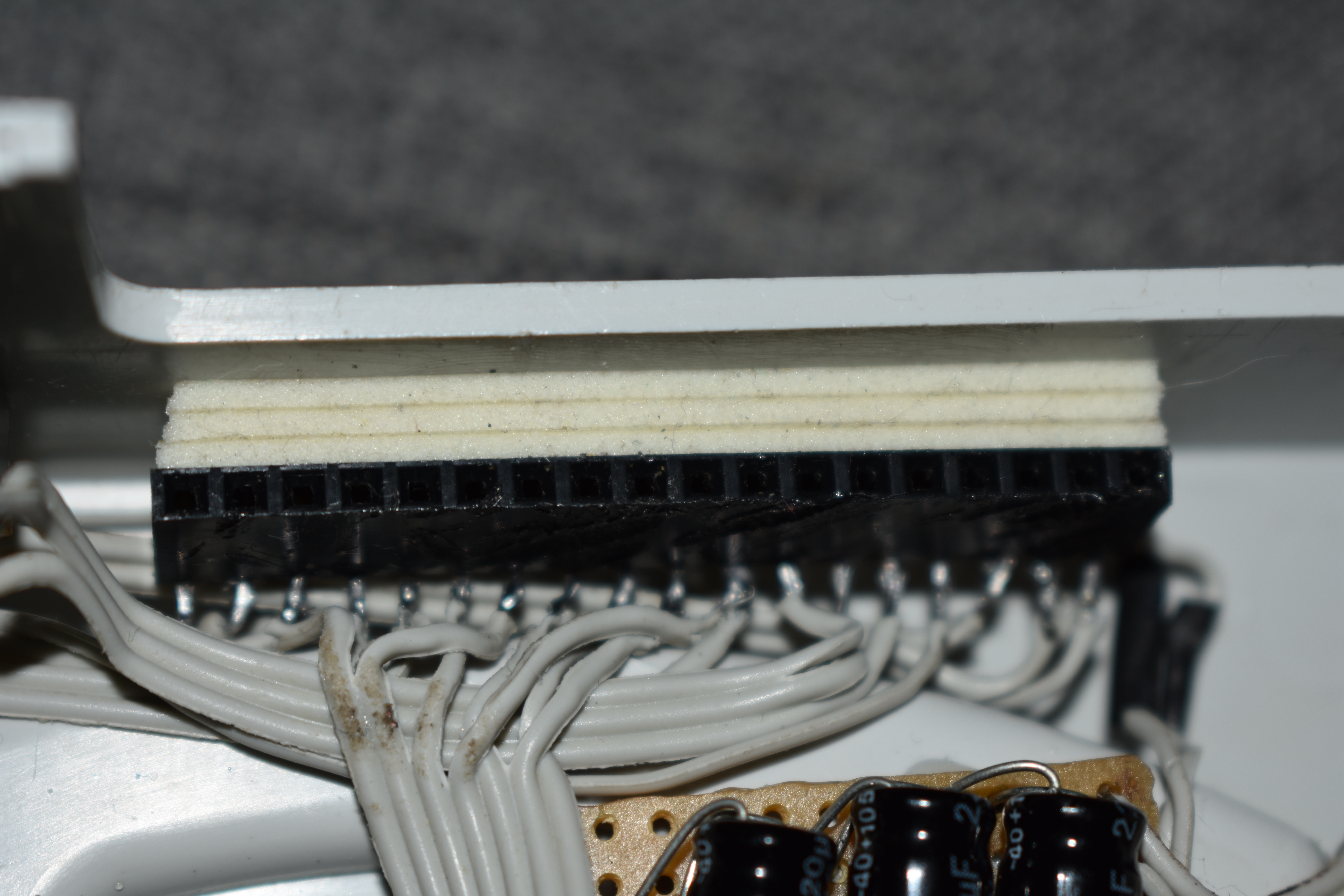 It was also really important to be able to take the hard drive out with as little effort as possible, mainly because I don't know any other way to transfer files to it. The wires are just long enough to allow the whole thing to open like a book, and the drive is secured by the lid so that it can be simply unplugged. 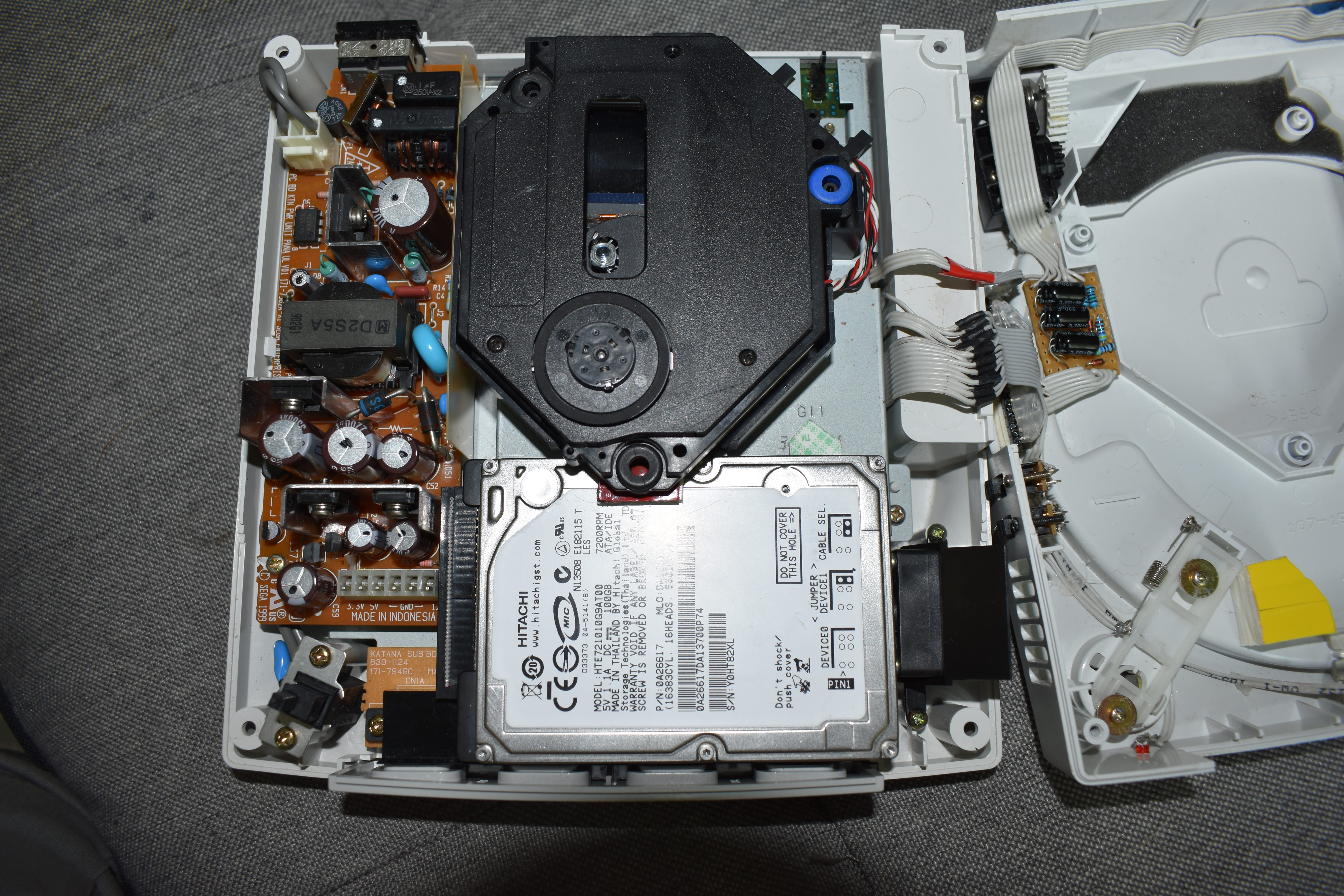 The distance between the connector on the psu and the screws on the fan is perfect for stopping side to side movement. 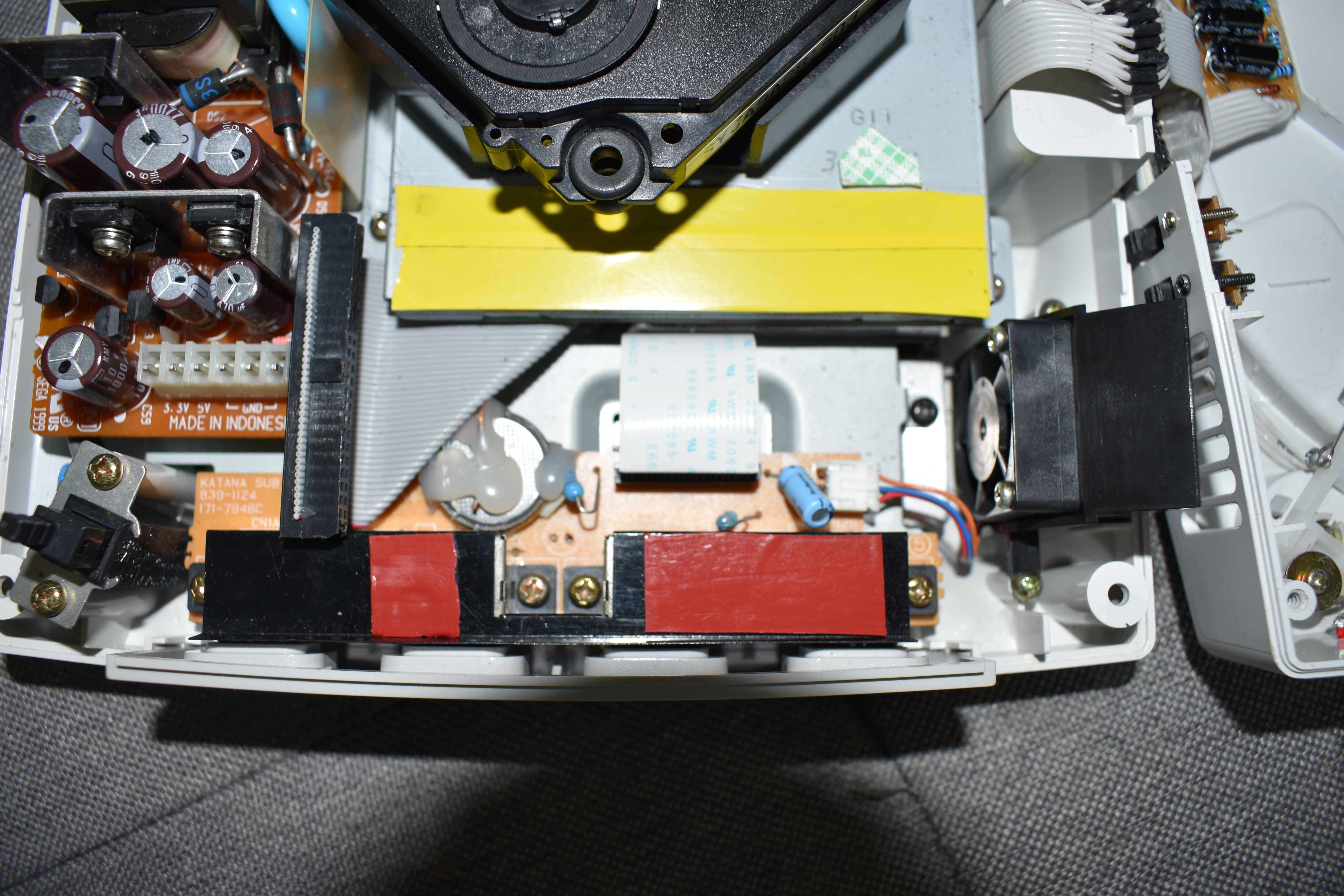 These foam blocks put light pressure on the top of the drive to keep it from moving at all. 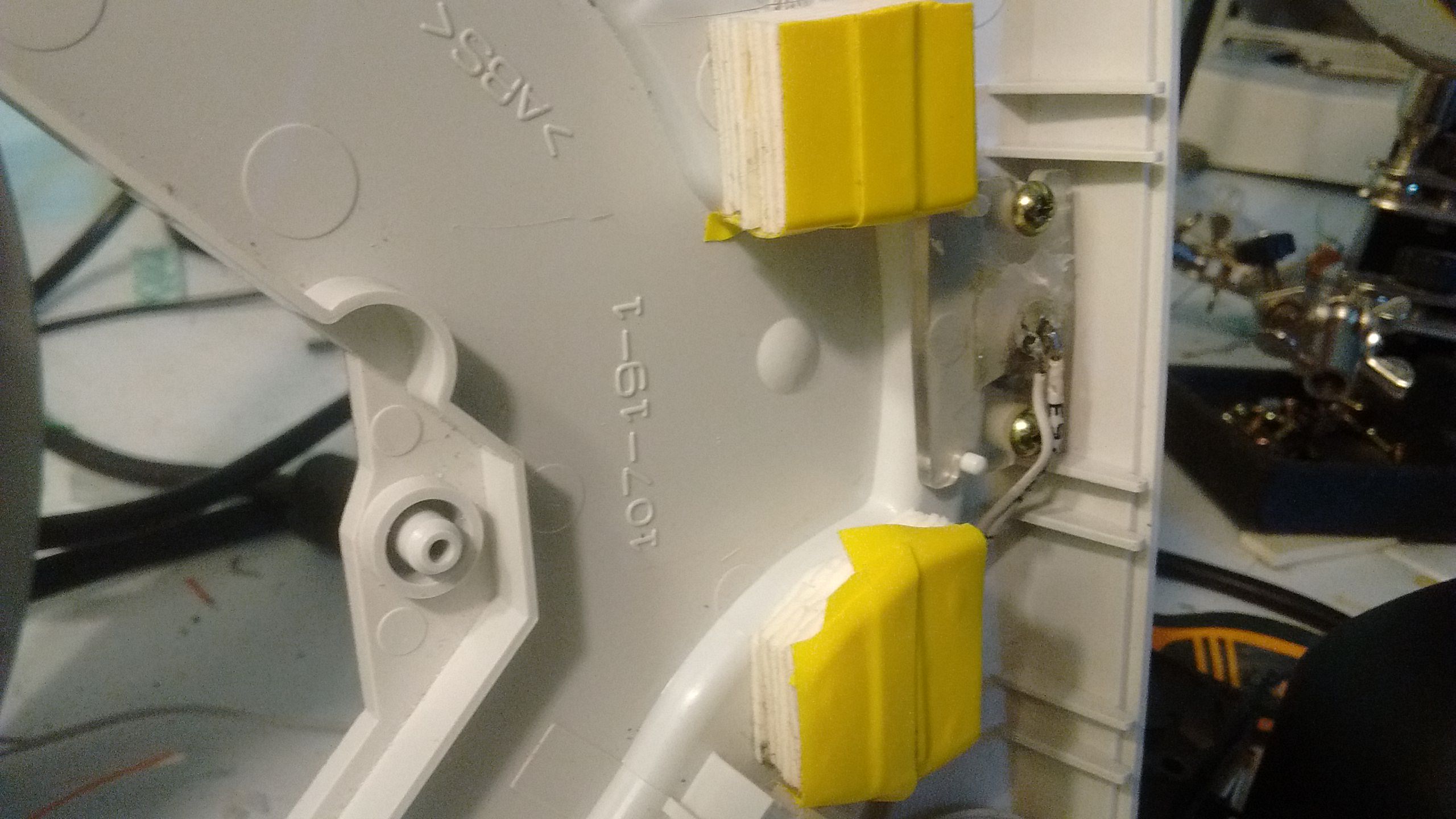 Let me know if I'm missing any important pictures or if you want a specific picture of something!


I want to overclock this in the near future and make what is now the VGA switch the overclock switch, however I'm concerned about overheating problems. The IDE cable blocks a lot of airflow and the drive makes a fair bit of heat.

I know that I could use a dreampsu but that would make the dreamcast less compact and one of my favorite things about it is the internal PSU with the standard connector. Also it would go against my goal of making it cheap as possible.

The best solution I can think of is to use one of the metal heatsinks with the heat pipes that came on early japanese dreamcasts, but I don't know if it would fit in a US rev1.

Thanks for looking at my dreamcast! I'm really looking forward to reading your comments and knowing what you would do differently!!

Oh I also posted this to reddit and imgur if you want a little more information.
Top

great work, i bought a similar pre modified DC with dual bios switch and VGA switch for about 100USD at taobao, but the HDD is outside

Simplebit wrote:great work, i bought a similar pre modified DC with dual bios switch and VGA switch for about 100USD at taobao, but the HDD is outside

Wow that's really cleanly modded, I can't believe you got it so cheap! What does the tact switch on the side do?

Do you have any pictures of the inside?
Top

The holes for the switches and VGA input look really smooth.

A lot of careful filing lol, it took hours. I used some extra shite harbor freight files so it would be way easier with actually flat files.
Top

Simplebit wrote:great work, i bought a similar pre modified DC with dual bios switch and VGA switch for about 100USD at taobao, but the HDD is outside

Wow that's really cleanly modded, I can't believe you got it so cheap! What does the tact switch on the side do?

Do you have any pictures of the inside?

it's cheap, actually it's only 75USD console only, plus 25 postage, bought from chinese site below in , the switch on side to choose boot from GD ROM or HDD, the switch on top is a reset button and a HDD indicator as well, it will flash when HDD is reading like PC, it's hard to open as all wires connected to top cover