Ugh. Its hard to choose. While Dreamcast was my first Sega console, I had a saturn later and its wonderful. Nights into dreams, Croc and Resident Evil were fantastic.
Severely underrated. I wish it would have beat the PS1 like originally intended. Sony = Devils.
Top

Better than the Playstation "in a few ways?"

The Saturn was better than the Playstation in every conceivable way except from a business standpoint.

But in any case, my vote goes to the Dreamcast. Love the Genesis and Saturn, but the Dreamcast is the one that's most nostalgic for me and the most fun as well.

The Dreamcast was "the future!!!" And to me, it still is. It was the last game console I owned. I have never owned any of the more modern consoles. That's because the Dreamcast is perfection and I have no need to improve upon it.
Top 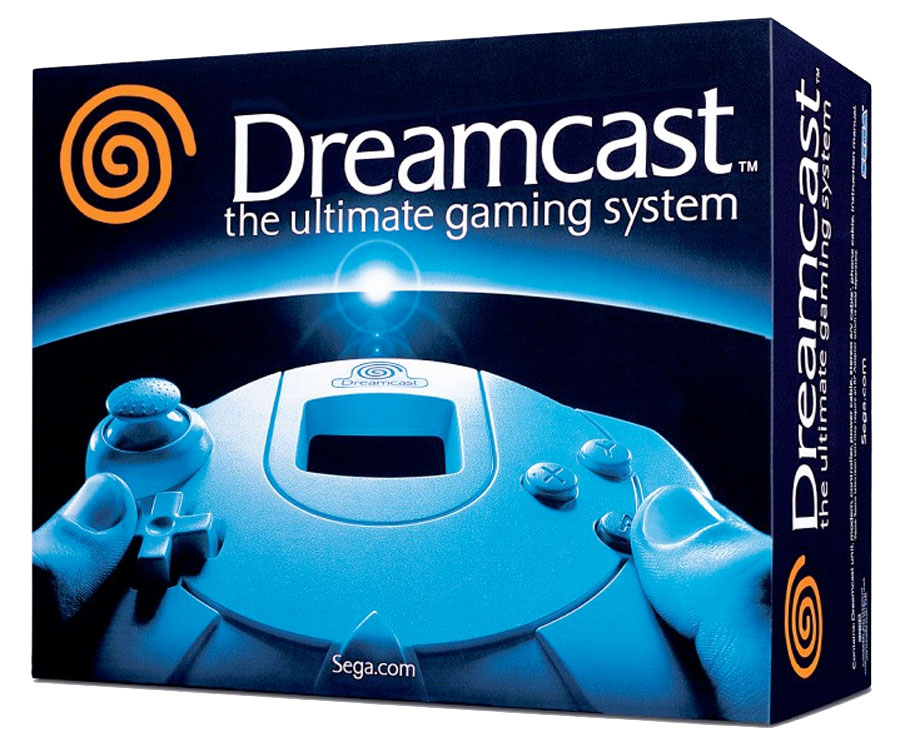 GameOverYeah wrote:The Saturn was better than the Playstation in every conceivable way except from a business standpoint.

From a technical standpoint, from the variety of games, quality of games, and the way in which the console was sold; the Playstation outshines the Saturn. The only thing the Saturn really had going for it, which was of any relevance, was the superiority in 2D gaming and the RAM cartridges.

This is coming from someone who, back in the day, was a complete and utter Saturn fanboy, and was nicknamed 'the Sony Slayer' in high school because of his conviction that the Saturn was the superior console. How wrong was I.

Not even members of segasaturn.co.uk are going to argue the Saturn is better than the PSX. This will, however, tell you that they appreciate the Saturn's game library more, which of course is fine.

The Dreamcast was "the future!!!" And to me, it still is. It was the last game console I owned. I have never owned any of the more modern consoles. That's because the Dreamcast is perfection and I have no need to improve upon it.

You're kidding? If not, then you're missing out on a heck of a lot of games. At least get yourself a Gamecube. Lots of amazing multiplayer games to be had on that console.
Don't make war! Play video games.
Top

I disagree that the PS1 was technically superior. Not only because of the Saturn's 2D capabilities, either. (But now that we're on that topic, the Saturn had arcade-perfect ports of 2D fighting games while the PS1 always got the crappy port).

Some of the prettiest 3D games of the time were on the Saturn. Virtua Fighter 2, Panzer Dragoon. These were very nice looking games; certainly they were at least as good as everything the PS1 could offer.

The PS1 had a library of like, over 10 thousand games. Obviously, there are going to be a lot of good ones. (There are also going to be a lot of crap ones). I had a PS1 back in the day and I loved it! I loved games like Ape Escape, the Crash Bandicoot games, the Ridge Racer series, the Tekken series, Ace Combat series, etc... (just noticed that stupid Namco gave the PS1 more love than it gave the Dreamcast)

Am I biased against Sony because their marketing douchiness caused Sega to go under? Absolutely. But seeing as I had a PS1, I have a lot of nostalgic attachment to that console. (almost as much as I do with the Saturn). But I feel the Saturn is superior.
Top

Well, like I've said before, there is a difference between technical superiority and personal preference. In the former catagory, the PSX triumphed in almost all areas where it really mattered. No-one at the time cared for 2D gaming. Not in the West anyways. Sure, I liked me some Street Fighter Alpha 2, 3 Dirty Dwarfs, etc, but 3D was the dish of the day, and Sony delivered to what consumers at the time wanted most of all.

Sure, the Saturn had arcade perfect ports of Capcom and SNK fighters. But seriously, outside of fighter elitists, who gave a flying fudge? How many people were willing to drop the PSX or N64 in favour of playing just a handful of fighters with faster loading times a few more frames of animation? And considering almost none of the fighters that made use of the ram carts even made it to the west, it's pretty much a moot point really.

Yeah, there's the odd Saturn title that holds up pretty well, like Panzer Dragoon. But these are the exception AND these games weren't released on the PSX, so how can you compare if they wouldn't have looked and ran better with the PSX architecture?

If you've not watched them before, I highly recommend you check out 'therealbluedragon's youtube channel, and watch vids of his 'Battle of the Ports' videos. Link here:

Seriously, this guy does the best comparisons around. Sometimes the Saturn prevails, usually when developers put a lot of effort in their ports, or due to a few technicalities. However, most 3D games clearly look and run better on the PSX.

But, yeah, nothing wrong in saying that you have a personal preference for the Saturn. I honestly couldn't tell you which one I like more, as I love them both for different reasons. The Saturn is more nostalgia for me, whilst it was only a few hours ago I returned to the PSX for a few games of Tenchu: Stealth Assassins, and I'm currently grinding through FFVII again. Rarely do I find myself setting up the Saturn for anything more than the odd game of Sega Rally or Wipeout. Or, if I've a friend over, Saturn Bomberman or Guardian Heroes. On that subject, despite being the most inferior version of it, I much prefer the Saturn version of Wipeout. The brighter colour palette, more consistent soundtrack (IMO), and glitches here and there that make the game more forgiving hence more playable. Anyways...

Am I biased against Sony because their marketing douchiness caused Sega to go under?

I know we're always likely to have a disagreement here, but honestly, I don't see how Sony have got anything to do with Sega's demise. Sega were perfectly capable of digging their own grave.

It's certainly not Sony's fault that they provided developers with the best hardware at the time to program for, at very competitive rates, whilst selling their console to consumers at a very approachable price, were able to win over Nintendo and Sega fans alike by delivering the games people wanted AND had the knack for spotting the next big thing (Gran Turismo, Tomb Raider, etc), all the while targeting demographics whom before were never associated with video games.

Seriously, taking playable copies of Wipeout to night clubs and rave parties? Genius. The Saturn got Tomb Raider first, but it was Sony who realised using Lara's sex appeal was the way of making the game a hit, and so the first true virtual sex symbol in the West was born.

At the end of the day, Sega shot themselves in both feet due to the failures of systems prior to the Saturn. But it didn't help that they initially built the Saturn to be even more inferior to the console we now know and, when they saw the specs of Sony's console, panicked and, out of sheer stupidity and arrogance, ignored the sound advice of Sega of America for a cheaper, more powerful, and more user friendly alternative, and instead Sega of Japan chose a setup that was counter-productive to developers, both 1st and 3rd parties alike.

Lets also not forget that, if we want to look at dodgy business practices, Sony doesn't hold a candle to the iron grip Nintendo exercised on 3rd parties in forcing allegiance to their console back in the nes and snes days (and to a lesser extent, Sega did the same thing, I believe).

Sony's Playstation was the democracy of games consoles (although I do acknowledge they initially did their best to deter 2D gaming, which is where the Saturn held an advantage in Japan). Sony allowed it easier for developers to make the games they wanted to make, with minimal constraints, using user friendly technology (having worked closely with 3rd parties for feedback, which is how they won over developers in the first place), all the while being economically sound. The Saturn was a bastard to program for, and just about anything 3D looked terrible without putting double the time and effort into, whilst the N64 disabled itself by sticking to cartridges.

Going PSX was a no brainer for everyone other than elitists and niche markets. If you're in those categories, there's no shame in having chosen those consoles instead. I was a Sega elitist, so I saddled with a Saturn. Heck, I didn't even ask for one. My family knew I was a Sega fanatic and got it for me for Christmas. But I loved the thing until the day the disc drive died, and I part exchanged my 30 games for a PSX, something which in a way I regret to this day. However, I've had equally great times with the PSX, if not even more, I must admit.

The Playstation and it's marketing was far douchbaggish. They revolutionised the gaming market, levelled the playing field on business practices, and widened it to a greater audience. Regardless if you were a Sega or Nintendo fanboy at the time, Sony deserves respect for, simply put, bringing out the best rounded console and knowing best at how to sell it.
Don't make war! Play video games.
Top

^ You make some good points which I will have to mull over (regarding Sony and third party developers).

But I was referring more to the PS2 and how it was marketed as some sort of Pentagon super-computer when its hardware wasn't even superior to the Dreamcast, and was inferior to X-Box and Gamecube alike. Also, how they used something completely non-game related (i.e. the fact that it also served as a DVD player) to sell more consoles, again when the X-Box and Gamecube were technically superior (especially X-Box).

Nonetheless... If you want to see a 3D game that was on both platforms, how about Dead or Alive? It looks better on the Saturn. The Saturn version is very close to the arcade version.
Top
Post Reply
51 posts

Return to “Sega Other”